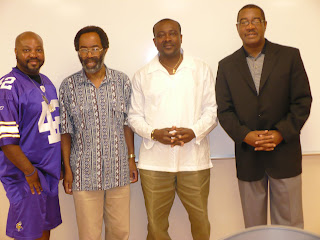 The Pan African Summit planning committee met again today, at the Center for Families. We have been meeting once a month, preparing for the Pan African Summit, scheduled for October 9, 2010. I have written again and again about the first Summit, the memory of which is indelibly stamped in the minds of all who attended.

The Summit planning committee feels obliged to keep the torch burning, mobilizing the people for the second Summit and the work that lies ahead, beyond the Summit. That is the purpose of our monthly breakfast meetings. As we head towards the Summit, we have used these meetings to learn about various issues pertaining to the Pan African community in Africa and in the Diaspora.

Today's meeting was like a mini-summit of Africans and African Americans. Seen in the photos, from left to right, are Gerald Montgomery (USA), Joseph L. Mbele (Tanzania), Edmund Ocansey (Ghana), and Eugene Dix (USA), who had led one of our meetings, reported here. Edmund and I shared our African experience and perspective, and Gerald and Eugene explained the African American experience and reality. I was particularly struck by the eloquent and profound account Gerald and Eugene gave of the psychological barriers that African Americans deal with on the road to self-fulfillment and success, barriers that, in my view, Africans don't even imagine, let alone understand.

As I sat there, listening to Gerald and Eugene, I told myself that no book I have read has taught me so much about the African American psyche. I realized how much work we need to do to make the Africans and African Americans knowledgeable about, and fluent in, each other's reality. I am using the word "fluent" purposefully, for our very lives and experience are a form of language. Learning about each other is like learning and mastering a language, in the deepest sense of that concept. 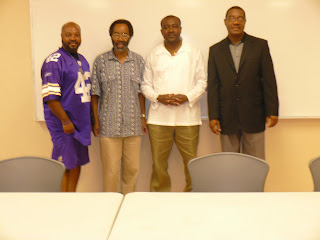 We did not say much about the Summit, but we noted that our plans are on track. As the Summit planning committee, we felt that through our discussions today, we had done important work of clarifying and solidifying our understanding and our vision. If we could share this kind of exploration and these kinds of insights during the Summit, we would have gone a long way towards achieving our goals.

Two weeks ago, I was in the midst of teaching Athol Fugard's plays to my senior class, all English majors. We got to Fugard after studying Tawfiq al-Hakim's The Tree Climber, an intriguing but very interesting play. Before that, we had discussed two plays by Ama Ata Aidoo and two by Wole Soyinka.

I had chosen two plays by Fugard: A Lesson From Aloes and Sorrows and Rejoicings. I recall, vaguely, that I read A Lesson From Aloes as a graduate student in the Department of African Languages and Literature at the University of Wisconsin-Madison, around 1981. The name of Fugard was constantly in my mind then, partly because my fellow graduate school student and friend, Deborah Foster, had written a study of Fugard's Blood Knot that was famous in the Department.

When I decided to try teaching Fugard, several years ago, I chose to start with Master Harold and the Boys, for no particular reason. In a subsequent semester, I tried Sorrows and Rejoicings and taught it again afterwards. In the meantime, I bought and browsed through Fugards's Notebooks.

My growing interest in Fugard led me to decide to teach two of his plays this semester. My class has been able to see not only the range of Fugard's artistic techniques, but also the depth of his understanding of the human cost of apartheid, his probing revelation of the tragic consequences of this system on individuals who experienced it.

Fugard is a deep thinker, who draws from his own experiences of South Africa and the world--since he traveled much--and from his voracious reading of other writers. In his plays and his Notebooks, we see the influence of his wide reading: Albert Camus, Samuel Beckett, Andre Malraux and so on.

Like Camus, Hemingway, and other famous writers, Fugard struggles with issues of the meaning of life and the human condition, truth, and art itself. I am most inspired by Fugard's brilliance as well as humility in the face of those he admires for their contributions, as is evidenced by this passage from his Notebooks:

Resumed reading Camus's "Carnets." I would be happy to spend the next ten years deepening my understanding and appreciation of this man--and rereading and again rereading everything he has written. Camus sounds out and charts the very oceans of experience, feeling and thought, on which I find myself sailing at this moment. His importance to me is monumental. Reading Camus is like finding, and for the first time, a man speaking my own language. (Athol Fugard, Notebooks, 1960-1977, Theatre Communications Group, 1984, p. 94)
Posted by Mbele at 5:56 PM No comments:

Plans for my "Culture and Globalization" workshops in Tanzania this summer are proceeding apace. I will conduct the first one on June 12 at the Meeting Point Tanga. Read here
Posted by Mbele at 7:26 PM No comments: