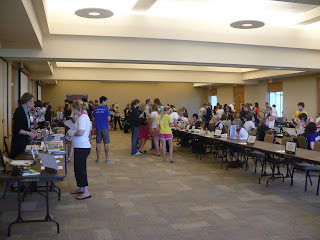 Today was International Studies Open House at St. Olaf College. This is an opportunity for faculty and staff involved in study abroad programs to showcase the programs to interested students: the academic environment, subjects offered, how previous students have rated them, safety issues, housing arrangements, opportunities for homestays and travel. 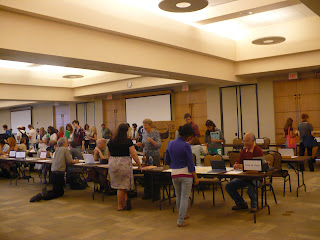 Over 70 percent of St. Olaf students study abroad, and the College is nationally ranked in this respect. 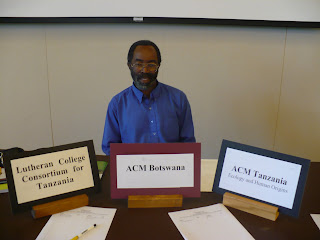 I have been involved as an advisor on programs that send students to Africa, such as LCCT, ACM Botswana, and ACM Tanzania. I enjoy talking about Africa and about my country, Tanzania. It is a priviledge to help Americans go there, and sometimes I take them there. I tell the students that one of my greatest interests is offering cultural orientation to Americans going to Africa, as I report on this blog from time to time. For example, read here, and here.
Posted by Mbele at 6:59 PM No comments:

Word War II had just ended, and the winds of nationalism were blowing across Africa. The struggle for independence gained momentum in the 50s, and the 60s, known as Africa's Independence Decade, saw most African countries gain independence.

The course involves studying writings--both political and literary--which capture the spirit of the times and the aspirations of the Africans. These include political speeches and essays by such writers as Kwame Nkrumah, Jomo Kenyatta, and Peter Abrahams, as well as works of fiction by Amos Tutuola, Chinua Achebe, and Sembene Ousmane.

During the 60s, more writers appeared, in both the political and literary arenas, such as Julius Nyerere, Wole Soyinka, and Ngugi wa Thiong'o, who focus on the realities and challenges of independence.

The list of readings includes writers from the African Diaspora, such as Aime Cesaire and Frantz Fanon. We have already discussed Cesaire's Discourse on Colonialism. We are now reading A Wreath for Udomo, by Peter Abrahams.

It is interesting to be discussing Peter Abrahams in this course, after teaching his Mine Boy in a different course--South African Literature. One realizes that a new course is truly a new context, which affords the opportunity to see a writer or a text in a new light.
Posted by Mbele at 5:30 PM No comments:

A Meeting of the Lutheran Colleges Consortium for Tanzania 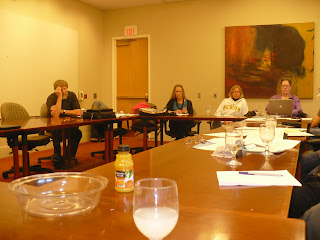 On September 18, the advisory board of the Lutheran Colleges Consortium for Tanzania (LCCT) met at St. Olaf College. Consisting of Concordia College, Luther College, Pacific Lutheran University, and St. Olaf College, the LCCT runs an exchange program with the University of Dar es Salaam (UDSM). 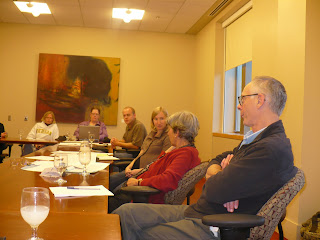 Students from these colleges go to study in Tanzania for a semester, and UDSM faculty and administrators spend about four months on LCCT campuses, for research and other professional activities. The program started in the mid-eighties and has involved dozens of Americans and Tanzanians. 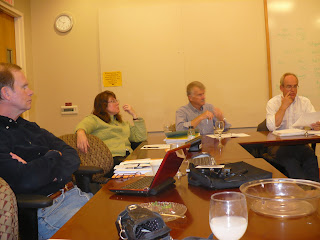 For many years, the LCCT program was unique among the American programs linked to the UDSM, because it was based on reciprocity, a feature that was noted and much appreciated by all. 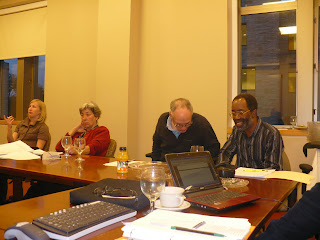 The LCCT board consists of people who have an interest in study abroad programs, an interest in Tanzania or Africa as such. We have done research in Africa, taught or written about Africa, led students on study programs in Africa, hosted or mentored African visitors and students on the LCCT campuses. In various ways, we contribute to African studies. 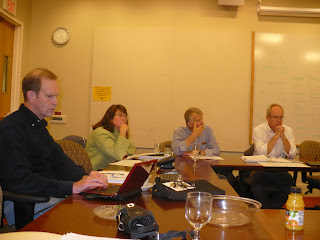 Each of the LCCT institutions takes turns administering the program. At the September 18 meeting, Luther College handed over the administration of the LCCT to St. Olaf College. 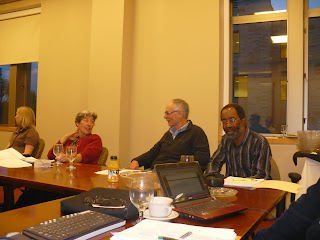 As a Tanzanian, I am pleased that many Tanzanians in academic and leadership positions have benefited from this program. Working on the board is a labour of love. We all value the work we do, knowing how important it is to the education of our students and to the UDSM. I wonder if I am a naive idealist, but I believe programs like the LCCT help build a better world.
Posted by Mbele at 3:10 PM 2 comments:

My Articles in "Kwanza Jamii"

Early last year, Maggid Mjengwa, owner of Mjengwa blog, invited me to write a column for Kwanza Jamii, a weekly paper he was starting. For most of the year, I wrote this column. The paper appeared in print and online. The print version ended at the end of the year, but Kwanza Jamii online continued.

Today I went online and saw that two articles I wrote for Kwanza Jamii are leading in the categories of "most discussed" and "most read." My "Safari za JK Nje ya Nchi" has been "most discussed" for many months. Although a handful of readers agreed with my arguments or engaged in civil discourse, most railed against me, with some resorting to "ad-hominem" attacks, instead of dealing with the arguments, a trend that Professor Matondo roundly criticized.

The article that has climbed to the top of the "most read" list is "Tutabadilika JK Akienda Rwanda?" This is a pleasant and welcome development. There is a widely held view in Tanzania that readers of newspapers prefer sensational news, reports of scandals and similar stories, not serious writing. My article appears to challenge this view, even though it has taken many months for it to reach the top spot.

On both counts, I have reason to be pleased. I have a record of provoking debate and controversy, from my early school days, as principal speaker in debating clubs. In writing for Kwanza Jamii, I sought to stimulate debate. I subsequently gathered my articles and published them as book titled CHANGAMOTO.

"Changamoto," a Swahili word, means something that stimulates or provokes thinking. The book came out just a few months ago. I am pleased that my first reader in Tanzania is excited about it, as I reported here. This reader's response and the online evidence indicate that the book will provoke strong reactions, generating, I hope, not only heat, but also light.
Posted by Mbele at 3:20 PM No comments: 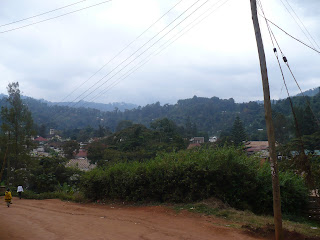 I wish I could write a fitting tribute to Lushoto, a small town nestled in the Usambara mountains of northeastern Tanzania. Though small, Lushoto is quite well known, in Tanzania and beyond. 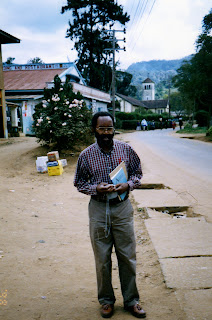 I have visited this town several times, mostly to research local folklore about Osale Otanga and Paulo Hamisi, famous outlaws who operated in this area in the 1950s. Still, I like this town so much that I would come for any other reason. 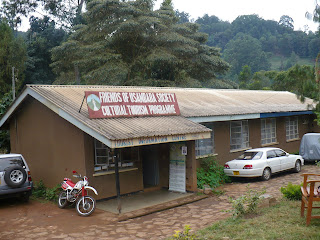 This region attracts tourists from around the world, and there are several programs here dealing with tourism. 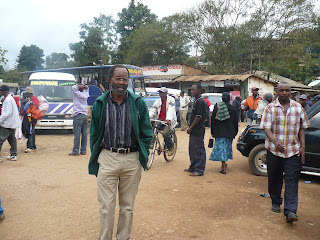 Downtown Lushoto is a hub of activity. The market is here, the bus stop, stores, and other businesses. 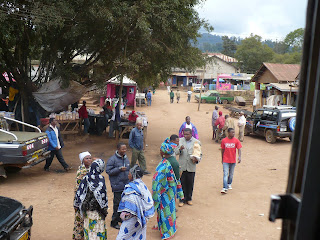 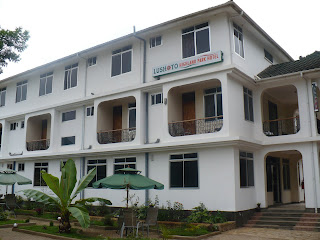 There are many places to stay, and new ones keep coming up. This year, I stayed in this hotel, near the District Office. 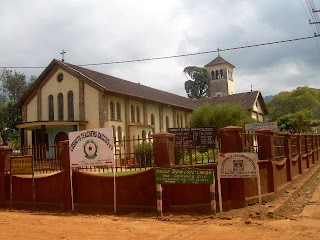 This church, just across the road from the police station, has become for me a kind of icon. 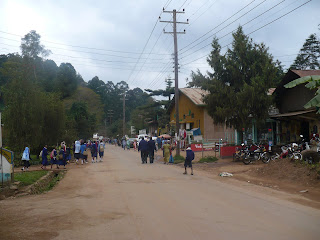 A walk in downtown Lushoto is refreshing, because of the cool climate and minimal traffic. 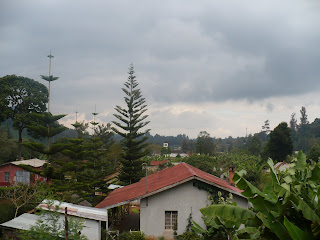 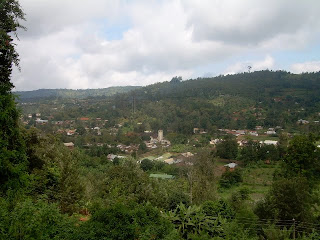 Whenever I am here, I seek vantage points from which to enjoy a panoramic view, the rich blend of trees of different kinds, houses, hills, the cloud-laden skies. I enjoy the peace and quiet, and wonder if anyone can ever tire of visiting this place.
Posted by Mbele at 3:57 PM 6 comments:

Where to Get my Books

From time to time, people ask me where they can get my books. I also realize that not everybody is able, or willing, to shop in a certain way, such as online. There are several ways to order these books:

The books are also available in Tanzania: 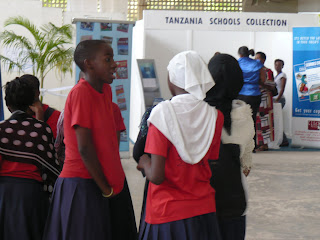 As I wrote in a previous blog post, on June 24-25, I participated in an educational and careers fair in Dar es Salaam, Tanzania, organized by Tripod Media. I sought, among other things, to introduce Africonexion, my small consulting business, to Tanzanians. 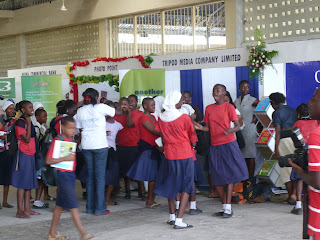 One of the most exciting experiences I had was observing the children who came to the exhibition. These were mostly school children. It was pleasant to watch them as they moved from booth to booth, alone, in pairs, or in groups. Like children everywhere, they openly displayed their excitement and curiosity. They made Diamond Jubilee Hall come alive. 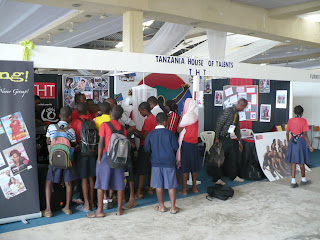 The booth of the Tanzania House of Talents was a popular spot for the children, especially when the live music was on. 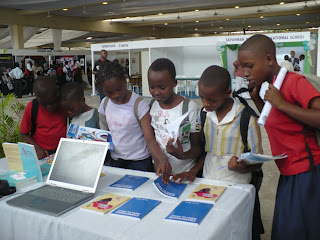 Those who came to my booth enjoyed browsing through my books. They were particularly interested in CHANGAMOTO, my Swahili book, since they could read it. 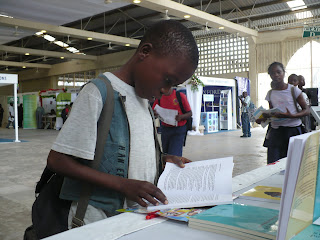 It was touching to see how genuinely interested these children were in books. I kept thinking why, as the children grow up and become adults, they lose this attachment to books. Our society is failing these children. 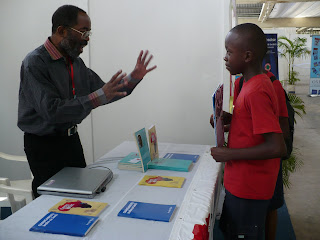 For the two days I participated in the exhibition, I talked with these children. I sought to inspire them, encouraging them to study hard. I told them to read widely, not just for the exams. They listened and I hope they will follow my advice. 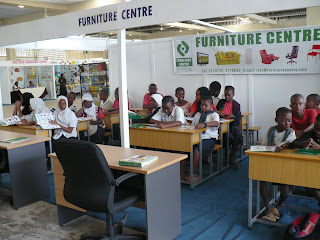 One of the exhibitors was the Furniture Center. The children had a great time trying out the desks and chairs, pretending they were in a real classroom. When I saw this, I thought about the many schools in Tanzania which lack desks, chairs, books and other facilities. There is no valid reason for a country like Tanzania, rich as it is in resources, to have this problem. 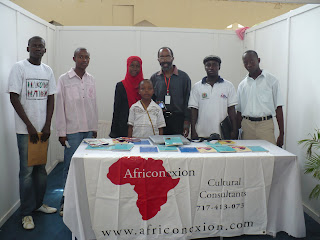 The woman in a red head covering impressed me very much. She came with her son to the exhibition, and she asked me some questions. I wish all parents would do the same, accompanying their children to such educational events. It is good for the children and for the future of our country.
Posted by Mbele at 1:36 PM No comments: