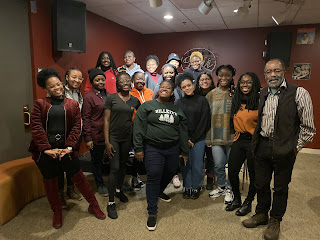 Yesterday evening, I made a presentation on African storytelling hosted by Karibu, a St. Olaf College student organization. I have done this a number of times over the years.

It is always a pleasure to share the story of the great significance of Africa in human history and civilization, and to illustrate this with evidence from folklore.

I demonstrated the wisdom and creativity of our African ancestors with several proverbs which we reflected upon. Then I told an Ethiopian tale, "The Donkey Who Sinned," from Harold C. Courlander's A Treasury of African Folklore, which made us think about the odious tradition of "might is right" and related social evils.
Posted by Mbele at 5:54 PM No comments:

Culture and Business Between Africans and Americans


As a cultural consultant, I have lately been thinking about the cultural dimension of business between Africans and Americans. This is part of my longstanding interest in the differences between African and American culture. I am writing this commentary in response to reports of a dialogue between American and Tanzanian businesspeople held in Dar es Salaam in June 2019.
The Americans and the Tanzanians discussed the challenges facing American businesses in Tanzania and the steps the Tanzanians should take to improve the situation. The Americans would like business to be conducted according to rules which are transparent, consistent, and predictable. Deadlines should be kept. Changes should be made in the business environment to ensure ease of doing business.
All this sounds reasonable, but we need to think farther. Africans have been conducting business since time immemorial and have evolved their own ways of doing business. The traditional African market, for example, accommodates barter, haggling, conversation about random topics, and much joking. It is a place not only for exchanging goods and money but also for building and furthering social relationships.
When we talk about business, we tend to think about goods and money. In reality, business is an interaction between human beings, who have values, feelings, and expectations influenced or shaped by their culture. Business is easy if the people involved belong to the same culture. Otherwise, there are challenges.
There are different cultures in the world, and business is inseparable from culture. There is not one way of doing business. American business culture is part of American culture. When Americans talk about ease of doing business, they have in mind business as conducted in their culture. It is normal and easy for them, but is it for non-Americans?
Are Africans, for example, comfortable with the American way of doing business? Do they easily navigate American culture? I have no doubt that just as Americans encounter challenges in dealing with African culture, so do Africans when dealing with American culture.
American business culture is rooted in capitalism, whose driving motive is making money as efficiently and quickly as possible. Whatever stands in the way of making money, such as the random conversations I have alluded to, gets eliminated.
In the African tradition, on the contrary, business has more purposes than just making money, and success is not necessarily defined in monetary terms. Business builds and consolidates relationships. Time is not money, but a resource and opportunity for building social capital.
We can carry these African values into the present world and use business to facilitate mutual understanding among nations. If business could help create a peaceful world, it would be a great success, even without tangible or immediate financial gain.
We need to think about creating and sustaining a business culture that is humanistic rather than obsessively materialistic. As the Bible puts it: “What will it profit a man if he gains the whole world, yet forfeits his soul?”
-----------------------------------------------------------------------
This article first appeared in Medium.
Posted by Mbele at 12:22 PM No comments: