An Intimate Portrait of Hemingway

In the last two days, I have been reading Denis Brian's The True Gen: An Intimate Portrait of Hemingway by Those who Knew Him. I bought this book attracted by its subtitle, the opening lines of its introduction, and the blurbs on its back cover.

This is a remarkable and most satisfying book. It not only confirms things I knew about Hemingway, such as his tendency to fabricate stories and pass them on as true, but it also offers new insights into the man famously known as Papa, providing more details than I have read anywhere else about his life and activities.

For example, while I knew that during the second world war Hemingway engaged in espionage against German submarines in the Caribbean sea around Cuba, using his boat, the Pilar, The True Gen provides more light into this matter in the form of testimonies by people who collaborated with him and also documents from FBI files.

I have also gained a new understanding of Pauline, Hemingway's second wife. My previous readings had led me to see her as lacking a maternal instinct, and whose devotion to Hemingway led her to put aside her own children: Patrick and Gregory. The True Gen changed my perspective, when I read the favourable testimony of Carol, Hemingway's sister:

Pauline was very friendly and kind and when I was living in Florida she invited me down to Key West--when Ernest was living in Cuba and was remarried to Martha Gellhorn. Pauline had always been very kind to me and treated me like a younger sister. When I went to Europe she helped me buy clothes and not only gave me the money, but gave me good advice. She knew what I'd need (184).

With my abiding interest in Hemingway's connection to Africa, I wish there was more in The True Gen on that side of Hemingway. Apart from books such as Mary Welsh Hemingway's How it Was, there are letters by Hemingway, and there are people--such as Patrick Hemingway--who could have provided testimonies.

Overall, The True Gen confirms Hemingway's image as a complicated, enigmatic person. Denis Brian's characterization of him is right on target:

Ernest Hemngway had an extravagant effect on others, leaving them beguiled, besotted, bruised, or bitter. To everyone he was an extraordinary, unforgettable presence (3).
Posted by Mbele at 8:15 PM No comments:

A Talk With Patrick Hemingway 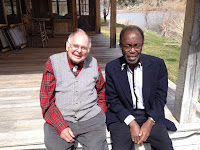 I called Patrick Hemingway yesterday evening at 8:22 pm, to let him know that I will soon be going to the John F. Kennedy Library in Boston, to visit the Hemingway collection. As usual, his wife Carol picked up the phone, and the moment she realized I was the caller, she got Patrick on the line.

As soon as we had greeted each other, Patrick mentioned his impending birthday and remarked, light-heartedly, that he was not getting any younger. I told him that his birthday reminds me of my visit, years ago, to Kansas City, where he was born, and the places I visited in that city, which are associated with Hemingway: the premises of the Kansas City Star, the Hemingway home, and the railway station. I forgot to tell Patrick that I also visited the Muehlebach Hotel.

I gave him an update of my Hemingway pursuits--that I had been encountering and reading his prefaces to the new editions of Hemingway's books prepared by Sean Hemingway. I also introduced the subject of the work Sandra Spanier is doing in producing volumes of Hemingway's letters. We agreed that Sandra's work is very valuable.

We talked about developments in Tanzania and sub-Saharan Africa in general, and Patrick reiterated his concern about the future, wondering whether our countries will be able to sustain their urban populations. He is concerned about the kind of urban growth that is taking place, and the increasing burden on the rural people who are supposed to feed the urban populations.

Patrick's concerns about the negative developments taking place in Africa remind me of Ernest Hemingway, who also bemoaned the disappearance of the balanced life of the African people he knew, such as the Maasai. Patrick emphasized again and again that he did not know the solutions to the encroaching problems he was so aware of.

I told Patrick that I called him to let him know about my plans to visit the Hemingway collection at the John F. Kennedy Library, in mid-June, and he repeated his previous pledge to introduce me to the library staff. One thing I always note in my conversations with him is that despite his age--turning 88 this June--his memory is incredibly sharp. He told me that this was a good time to visit the John F. Kennedy Library because there is an exhibit in progress which will continue for some months. He said I should make sure to also see the lion on the floor.

I didn't know anything about this "lion on the floor," but just now, while writing this blog post, I have checked online and read about it. To my surprise, this is the famous "Miss Mary's lion" we read about in Ernest Hemingway's Under Kilimanjaro. This is truly exciting, since I didn't know that this lion had been transported to the U.S.A. I also checked online just now and found information about the exhibit. This is going to be a truly remarkable experience for me.

I also mentioned to Patrick my desire to visit the Hemingway home in Key West, but he said I should think more about visiting Cuba. Patrick and I have talked about Cuba before, with a focus on the Finca Vigia, Ernest Hemingway's home. He noted that with the current state of relations between Cuba and the U.S.A., this should be easier than in the past, although such visits for researchers were allowed.

We talked for 25 minutes, which is probably the shortest conversation we have had, but it was valuable and memorable. (The photo above was taken at Patrick and Carol's home in Craig, Montana, on 27 April, 2013)
Posted by Mbele at 7:40 PM No comments: