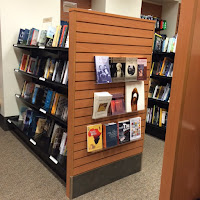 I visited the St. Olaf College Bookstore yesterday, as I regularly do, to see what is new. Hovering among the aisles, I saw my Matengo Folktales on special display.

Naturally, I was touched. Although there is a section in this bookstore devoted to books by faculty--and one can see my books there--I was pleasantly surprised to see my Matengo Folktales displayed as shown in the picture. I thought I should capture this moment because after a certain time, different books will be displayed on this particular spot.
Posted by Mbele at 11:45 AM No comments:

I received an invitation from Karibu, a student organization at St. Olaf College, to tell African folktales as part of the Africa Week celebration. I have done so in the past and will do it again, any time. How can I decline an opportunity to showcase African creativity and the African contribution to the universal culture of storytelling and all it stands for?

As the cradle of the human race, Africa is the birthplace of language, storytelling and civilization. Together with other folklore forms such as proverbs and songs, stories reflect upon life and the human condition and the world in general. They project man's joys, sorrows, successes, failures, and above all the human desire and capacity to thrive against any odds.

Stories are a rich blend of aspects ranging from philosophical reflections, moral lessons and entertainment. They constitute a dynamic system that adapts itself all the time to changing circumstances, thereby remaining always relevant. Having originated and evolved as an oral tradition, storytelling thrives in written and other modes, including film.

This evening as I was speaking to my Karibu audience, I mentioned some of these things and then told two tales: "The Chief's Daughter" and "How the Ashanti Became Debtors," both from West African Folktales by Steven H. Gale.
Posted by Mbele at 6:45 PM No comments:

African Storytelling at a Birthday Party

This evening I did something I have never done before--performing African folktales at a birthday party. The event took place at the Community Center in Maple Grove, Minnesota. A West African woman and children who had witnessed my storytelling during Afrifest wanted me to do something similar at the birthday party.

I drove from Northfield to Maple Grove and got there around 7pm, the time I was expected, The party was over half way through, and the room was alive with children of different ages as well as adults. The only people I knew were the woman who invited me and her daughter who had attended my Afrifest folktale performance.

I was promptly invited to take the floor and after briefly introducing myself and acknowledging the one girl I had met before, proceeded to tell two West African tales: one about Frog and Spider and one about a character called Money. After the first tale, I asked the children some questions about what they learned from it. As I have always noted when telling tales to children, they have good ideas and speak freely.

I deliberately chose tales that did not involve monsters, violence, or death. This is not because I worry about the children. I have noted over the years, and in different parts of the USA, that children take such tales in stride. It is the adults who have worries and misgivings. I have always been intrigued by this. In fact, today, I asked the girl who attended my Afrifest storytelling whether she thought the tales I told that day were scary. She said no, emphatically.

I concluded my presentation with a few remarks about my work of recording African tales and I held up a copy of Matengo Folktales. Someone asked if the book was for sale, and I said it was, adding that I had brought a few copies. Several people stepped forward to buy them, and I hope they will appreciate the tales as well as my commentaries on them.

Feedback on my Talk at the Cannon River Conference

On April 11, 2015, I spoke at a conference of the Southeastern Minnesota Synod of the Evangelical Lutheran Church in America. I wrote about this event on this blog and on my Swahili blog. I have seen in The Spire, the newsletter of the First Lutheran Church of Red Wing, Minnesota, the following report on my speech.

In April some representatives from First Lutheran, United Lutheran, and St. Paul’s Lutheran attended the women’s Cannon River Conference in Zumbrota. There was a very thorough explanation of the history of the beginnings of the Lutheran church in this area of the country, so there was less time for the main speaker, Joseph Mbele, a St. Olaf professor.

Besides teaching, Professor Mbele works with groups in the area to mediate cultural conflicts. He asked us to look at the positive and the potential in all people; do not rush to judgment. What is natural in one culture may not be correct in another, and what is an issue in one culture might not be an issue in another.

For example, in Faribault the storekeepers were upset because the Somali men stood in front of the stores or nearby and talked. The storekeepers felt this was loitering and bad for business. In Africa this was the custom to talk together outside stores and it was considered impolite to make a quick purchase and leave. Americans are very concerned about being on time. In Africa it is considered rude to rush by people and not talk to them, and in small villages many are related. On the way to a meeting an African might stop and talk to a number of people, and probably will arrive late to a meeting.

Other examples: In Brooklyn Park other residents were complaining about loud music. In Africa everyone in the small town is invited to a wedding and no invitations are sent out. Child raising views are quite different too; Africans take the phrase, “It takes a village” quite literally. Everyone is supposed to help watch the kids while Americans believe they should only watch their own children and don’t want any help from other people.

Professor Mbele wrote a book about some of these differences, Africans and Americans: Embracing Cultural Differences, which we purchased for the church library.

The next meeting of the Cannon River Conference will be held in April 2016 at St. Paul’s Lutheran Church in Red Wing with United and First assisting.

A Discussion on Adichie's "Purple Hibiscus"

This evening, we had a discussion at St. Olaf College on Chimamanda Ngozi Adichie's Purple Hibiscus, organized by Professor Joan Hepburn f the English Department. She had lined me up as discussion leader together with herself.

I started the discussion by giving the context of Adichie's life and work. I stated how she fit in the tradition of African Anglophone literature which goes back to the days before independence as is exemplified  in Nigeria by writers like Amos Tutuola, Chinua Achebe, and Cyprian Ekwensi.

I then discussed Adichie, her upbringing on a university campus in Nigeria and her travels abroad, including her time as a student in the USA. I emphasized the cosmopolitanism in both her life and writings. I talked about her writings, highlighting her novels and short stories and giving an overview of her key themes. I mentioned her TED lectures as well.

After my presentation, Professor Hepburn led a discussion of Purple Hibiscus, which moved through key themes such as family, religion, and politics. We dwelt at length on the theme of religion and its peculiar effects on characters like Papa. We probed these themes in depth and discovered the complexity with which they are realized.
Posted by Mbele at 8:28 PM No comments:

"Nyang'au" is built around two characters: a human being and a hyena. Interestingly, if not paradoxically, throughout the drama involving the two, we learn about the hyena's feelings and motivations, but not those of the man. This, I can say, is because the man is oblivious to the presence of the hyena. The fact that we, as witnesses, know everything that is going on affords the action a certain dramatic irony.

As an animal, the hyena carries sinister associations in the cultures of many parts of Africa and elsewhere. From ancient times, the hyena has been featured in paintings, sculpture and other art forms. In his Green Hills of Africa, in which he describes various East African animals, Ernest Hemingway expresses his dislike of the hyena.

Hyena features predominantly as the dupe in the folktales of Eastern, Central and Southern Africa. Driven by greed, he always lands in deep trouble, on account of either his own stupid decisions or the trickster's intrigues. Haji Gora Haji's "Nyang'au," which we can read as a fable, belongs in a vast, age-old tradition of representation.

1.       The hyena was in the bush, when a man hurried past
Speeding as he was, his arm flagged about
Raising the hyena's hopes that soon it would fall off
He kept salivating, hungering for the arm

2.       He sharpened his teeth, positioning himself properly
So that when the arm fell off, he should promptly catch it
And enjoy a tasty treat, eating to satisfaction
He kept salivating, hungering for the arm

3.       He followed hither and thither, not one to tire of striving
Coming behind with the man ahead, the hyena trailed the man
Waiting for that arm, hoping to feast on it
He kept salivating, hungering for the arm

4.       Little did he know, that for the arm to flap about
Was its natural wont, no harbinger of dismemberment
He nevertheless kept following, choking with desire
He kept salivating, hungering for the arm

5.       The one he was following, reached his destination
The dream he had been dreaming, ended in uncertainty
The arm he failed to get, in vain had he striven
Deep regrets assailed him, for failing to get the arm.
Posted by Mbele at 2:44 PM No comments:

A Course on Muslim Women Writers

I am delighted that in the spring, 2016, I will be teaching a new course, "Muslim Women Writers." Having taught works by Muslim women writers like Mariama Ba, Nawal el Saadawi, Alifa Rifaat, and Leila Aboulela, mostly under the rubric of Post-colonial Literature, I have decided to create a course devoted solely to such writers.

The Muslim world is perhaps the least understood or most misunderstood part of the world among Americans, who tend to see it as homogeneous, and to whom the very name Muslim conjures up images of religious fanaticism and terrorism. They tend to imagine Muslim women as perpetually veiled or burka-clad, suffering in silence under archaic religious and cultural traditions. That there is a longstanding tradition of writing by Muslim women in languages such as Urdu, Arabic, Turkish, Hausa, Swahili, French and English is not well known among Americans.

This course will explore the prevailing misconceptions. With a focus on writings in English and some translations, we will discuss writers from Bangladesh, Pakistan, Egypt, Sudan, Senegal, and the USA, in the context of Islam, Orientalism, Islamophobia, and Islamic feminism. It will illuminate the ways Muslim women writers imagine and interpret their condition within the framework of culture, religion, and gender.