I also gave talks there, including one to a gathering of immigrants and refugees, and, more recently, to audiences at South Central College. On all these occasions, I met people who have continued to be part of my network of friends and acquaintances.

In these festivals, I discover the great wealth of writing that is flourishing around us, and experience the joy of buying books and having them signed by the authors. As I am writing this blog post, for example, I have next to me a copy of John Calvin Rezmerski's What Do I know? New & Selected Poems, which bears the author's inscription and signature:

I look forward to meeting people I know, such as author Becky Fjelland Davis, who will be participating in the Festival. She is an inspiring educator, who has taken Americans on study trips to South Africa, and who is one of my most faithful readers. Thank you, Becky.
Posted by Mbele at 5:26 PM No comments:

Ernest Hemingway, a bridge between cultures


The Minister spoke to the press regarding the number of U.S. scholars who attend each edition of the event and how their interest in the life of the winner of the Nobel Prize for Literature also brings them closer to the social and cultural life of the island.
What made Hemingway fall in love with our country, he noted, were the characteristics of the people, as “he was an enemy of formalities and here he found a suitable setting for his work, without the usual protocol of other big capitals. This spontaneity is multiplied in the cultural level of our people, in the way that they appreciate the arts in general and literature in particular.”
He highlighted the role of Hemingway as a bridge between two cultures, “today more than ever because once Americans are able to travel to Cuba freely, a great incentive will be to discover what it was the writer found here, what he saw in our people that made him established himself here and take to Cuba as a second home.”
The opening day of the conference began with a tribute to René Villareal, Hemingway’s butler at his Finca Vigía home, and who the bestselling author called his Cuban son.
Villareal was the confidant of the famed writer for 14 years, but their relationship dated from his childhood, when in 1939 the Pulitzer Prize winner rented the property because in it he found the peace to write.
The tribute was followed by the presentation of the book, The Last Lion, by Argentine Professor Richard Koon, which in six parts takes a journey through the life of the remarkable writer from his childhood in Illinois until his death in Idaho.
Koon noted that the research for the book had taken some four decades and it brought together the testimonies of people who in various ways were linked to the life and work of Hemingway, including the Catalan artist Joan Miró and the writer Rafael Alberti.
The program for the coming days of the event, which ends Sunday, includes celebrations for the 80th anniversary of the first edition of Green Hills of Africa, and the 90th anniversary of the publication of his book of short stories In Our Time.
A panel entitled, Hemingway and Martha Gellhorn: In love and war, led by Professor Sandra Spanier, University of Pennsylvania, and the book launch of Hemingway: the unknown, by Cuban Enrique Cirules, will also feature.
Fotos con pies y créditos:
Ricardo Koon, author of the book The Last Lion. Photo: Padrón, Abel

Source: Granma
Posted by Mbele at 4:28 PM No comments: 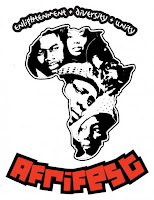 Today I attended a meeting of the Afrifest Foundation at the Brookdale Library in Brooklyn Park. The main agenda item was planning for this year's Afrifest, scheduled for August 1.

Fortunately, we have been doing this for years and know exactly what is needed to accomplish the festival. We are excited and grateful to have secured financial and other support from the city of Brooklyn Park. This is a new development for us, testifying to our growing visibility and value to the community.

We spent time brainstorming on ways of enhancing the Festival this year, and we decided to give particular attention to children. We plan to have various children's activities and games. For the first time, we will have performances of African folktales. I am the one who will do this, given my many years of involvement in African and world folklore. I enjoy performing to any kind of audience, from children to college students.

For more information and updates, please check the Afrifest Facebook page.
Posted by Mbele at 9:14 PM No comments:

Two days ago, I saw comments on Amazon.com by a reader of my book Africans and Americans: Embracing Cultural Differences. The reader, Ruth Ann Baker, wrote:

Learned some things I don't think I could find elsewhere. There is Lots of info on relationships and social etiquette.

I have cited the words verbatim. I wanted to acknowledge this reader and express my gratitude, as is my habit. I value the fact that someone took the trouble to obtain and read my book, and then to write about it in such a public forum accessible to the whole world.

As usual, I am gratified that this reader considers the money and the time she spent on my book worthwhile. I would have been crestfallen otherwise.

I have noted that this reader used the Kindle edition of the book, the publication of which I announced on this blog. I have been following, at both Kindle and lulu.com, how buyers are responding to this development in publishing technology.
Posted by Mbele at 9:16 PM No comments:

Another Request for a Translation of my Book

From time to time, American readers of my book, Africans and Americans: Embracing Cultural Differences, have asked me whether there is a Swahili translation of it, and some have requested me to translate it. These are people who have lived in East Africa, as volunteers or visitors, and in inquiring about a translation, they are thinking of the East Africans.

Unfortunately, I have not yet translated the book, even though I have wished to do so for a long time. I know I could easily do it, seizing the opportunity to express in Swahili the ideas and sentiments I have expressed in English, and I have imagined the translation having its own distinctive qualities, different from the original.

Yesterday, I got another request from an American woman whom I don't know. I am so touched by her message that I could not resist sharing some of it here. I have placed dots where I have omitted sentences or phrases:

....I hope one day that you will translate your wonderful book. It is such a wealth of knowledge for me, and I know my Tanzanian friends would feel the same. Of course most good people would never mean to hurt or offend a new acquaintance, but sometimes when we are lucky enough to make a friend from a different country, we can use a little guidance on how to be respectful of each others cultural differences. Your book has given me that gift, and so I thank you for that!....Last year I went to Africa for the wildlife, but I found it was the Tanzanian people who stole my heart. This year I will return and visit Eli's village and meet his family. I am so excited about my visit. That is why it is so important to me to do my best to not be the classic "UGLY AMERICAN". Thank you again for your response. I hope you will consider writing the Kiswahili version of your book in the future. I know there would be many people who would find it both helpful and fascinating, as I did....

I have nothing to say except to remind myself of the famous Latin adage,"Vox Dei vox populi" (the voice of the people is the voice of God), and seriously prepare to translate the book. I thank my American readers for being so supportive of my efforts.

The BVC was created for the management of wildlife and natural resources and for promoting education in these matters as well as tourism. As a resource center, BVC seeks to provide education on the historical and cultural heritage of the area for the local communities and visitors.

As an educator and cultural consultant, I am pleased to collaborate with the BVC. The decision by BVC to acquire my books for their shop simplifies matters for people in Tanzania wishing to buy them. They can contact BVC by email: info@burungevisitorscentre.or.tz or imborutours@gmail.com or using the phone numbers listed here:  http://www.burungevisitorscentre.or.tz/.
Posted by Mbele at 10:18 AM No comments: