A Discussion on Kitereza at the University of Minnesota

Today, at the University of Minnesota, Dr. Charlotte (Shoonie) Hartwig and I discussed Aniceti Kitereza, a distinguished writer who is, however, not well known. Shoonie has been writing a book, and the presentation today centered on this project.

Kitereza was born in 1896 on Ukerewe Island in the Tanzanian part of Lake Victoria. As he grew up he became passionate about recording the traditions and culture of his people. As part of this process, he wrote a great novel in Kerebe, his mother tongue, completing it in early 1945. It is a detailed account of the traditional Kerebe way of life which Kitereza chose to present in fictional form in order to make it interesting to read.

After a protracted and fruitless search for a publisher, and following the advice of his American friends, Kitereza translated his novel into Swahili. Still, he waited many years before the novel was published in 1980 as Bwana Myombekere na Bibi Bugonoka na Ntulanalwo na Buliwhali.

Shoonie is uniquely qualified to talk about Kitereza since she and her husband, the late Dr. Gerald Hartwig, knew him well, having first met him in 1968 in Ukerewe. They had extensive correspondence with him to the end of his life. Kitereza was a prolific letter writer. In today's presentation, Shoonie shared an overview of Kitereza's life and work, illustrated with slides. She stated that Kitereza worked tirelessly to preserve the traditions of his people, guided by a question that he himself posed: "What must we teach our children?"

I gave a brief overview of Kitereza's work from my perspective as a literary scholar and folklorist. I highlighted several key issues that feature in discussions of African literature, especially writing in African languages and translation. I noted how Bwana Myombekere might affect the way we conceptualize the evolution of the African novel and how Bwana Myombekere might be seen in relation to the work of writers like Daniel O. Fagunwa and Amos Tutuola of Nigeria, Gakaara wa Wanjau of Kenya, and Shaaban Robert of Tanzania. This would be a study in comparative literature.

I have read Kitereza's Swahili translation of his novel. His Swahili, though different from standard Swahili, has the flavour of oral storytelling in a Bantu language such as my own Matengo. I liked it for this reason. Kitereza's novel has been translated into French and German, but according to Professor Gabriel Ruhumbika, a native Kerebe speaker and well-known translator, those translations have unnecessary deficiencies.

Professor Ruhumbika has translated Kitereza's original Kerebe novel into English and published it as Mr. Myombekere and His Wife Bugonoka, Their Son Ntulanalwo and Daughter Buliwhali. Having read it, I find it as engaging as Kitereza's Swahili translation. It deserves to be widely read. I will say the same thing about Shoonie's forthcoming book, a personal account laden with information hitherto not available to the world.
Posted by Mbele at 9:09 PM No comments:

My April 4 Lecture at the University of Minnesota Rochester 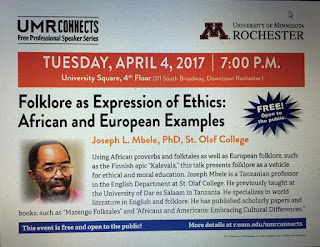 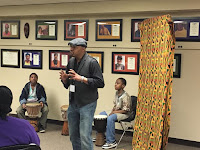 This evening, I attended an open house event at the premises of the Network for the Development of Children of African Descent in St. Paul. Founded in 1997, this network seeks to promote positive education for children and youths of African descent. Its mission embraces and engages parents and other community members in literacy programs, tutoring, and cultural enrichment. It runs a library service for children and adults. 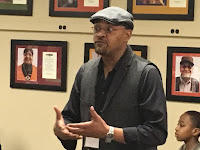 Gevonee Ford welcomed us to the open house with a brief overview of the history and mission of the NdCAD. He eloquently explained, for example, that black children grow up in a world saturated with narratives of negativity and brokenness in the black world: from relationships to values and dreams. Without discounting the existence of problems, the NdCAD promotes the narrative that not everything is broken, and that there are positive things that need to be developed in order to build a better future. 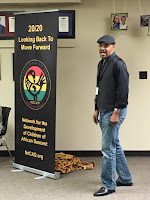 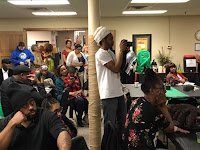 Gevonee announced that this year marks the 20th anniversary of the NdCAD, and he unveiled the commemorative banner. The first photo above features the banner before it was unveiled. 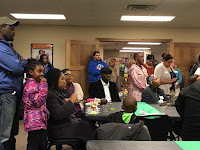 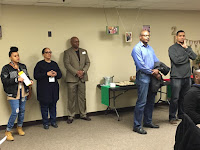 I had visited the NdCAD for the first time on February 18. Seeing all those students, parents, volunteers, meeting rooms, books and other educational resources, not to mention photos of famous black personalities lining the walls, was an eye-opening experience. I was inspired to witness the communal spirit and the collective desire to bring about real education to the children and the community at large, rooted in an Afrocentric perspective, not in any wishy-washy or romantic sense, but a real understanding and appreciation of the central role that Africa and people of African descent have historically played in the world. 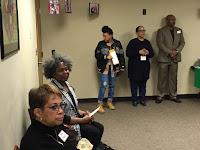 That the NdCAD has been operating for twenty years and looks confidently to the future is a remarkable story of unwavering determination and hope. It is a story that deserves to be widely known, for there is no doubt that it will inspire others as it has inspired me.
Posted by Mbele at 10:40 PM No comments:

An Evening of African Food and Folklore 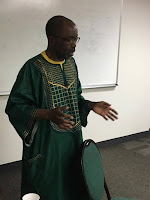 In the evening of February 28, a number of people gathered in Brooklyn Center to share African folklore. The event was a joint initiative of the Kofa Foundation and me, as founder and owner of Africonexion: Cultural Consultants. We wanted to mark the last day of Black History Month and to recognize the work of the Kofa Foundation.

The Kofa Foundation was started to support victims of the ebola crisis in West Africa. Africonexion promotes cultural awareness, helping individuals, institutions, and organizations understand and deal with issues stemming from cultural differences.

We started the evening with delicious food prepared by the Kofa Foundation. Then, I stood up to make my presentation. 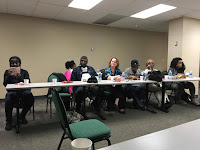 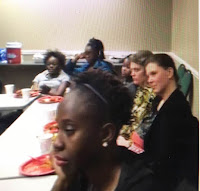 As I have been doing in my recent presentations, I gave a preview of Africa as the cradle of the human race and civilization. I emphasized the significance of oral culture and its implications, to foster an appreciation of the ingenuity of non-literate people.

I illustrated African traditional wisdom through proverbs and two tales: the Haitian tale of Frog and the well featured in  Harold Courlander's A Treasury of Afro-American Folklore and "The Monster in the Rice Field," featured in my Matengo Folktales. 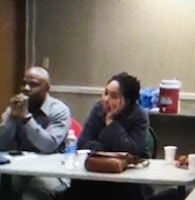 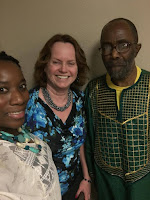 Decontee Kofa, founder and director of the Kofa Foundation, seen in the photo on the left, hosted the event and announced that she would soon host a similar event. Lori, the lady in the middle, told me about the Transformative Circle, an organization that involves "diverse people coming together to foster greater understanding and appreciation for our community, cultural differences, and customs." She said she would like me to make a presentation to them.

I had brought copies of my books--Africans and Americans: Embracing Cultural Differences and Matengo Folktales--and people were able to see and buy them, with proceeds going to the Kofa Foundation.
Posted by Mbele at 8:35 PM No comments: