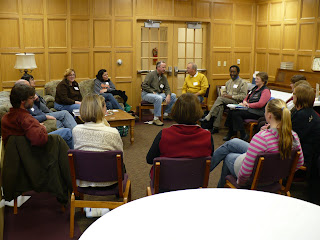 Yesterday I went to Chippewa Falls, Wisconsin, about 123 miles from Northfield, to speak with a group of people going to Malawi to conduct eye clinics. I had been invited by Diane Kaufmann, seen in the photo above, to my left. She has visited Malawi a number of times in her capacity as coordinator of the companion synod relationship between the Northwest Wisconsin Synod of the Evangelical Lutheran Church (ELCA) and Malawi. She has led mission trips to Malawi, under the auspices of this partnership, and she and I have run retreats at Luther Point. 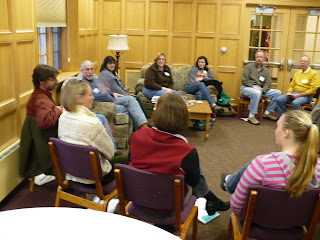 The trip is scheduled for April, and the destination is Chitipa and Karonga. Some of the people have visited Malawi before, and others are going for the first time. 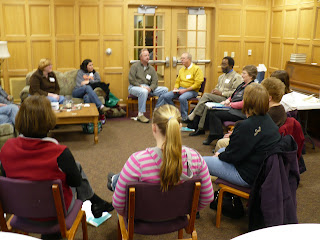 Diane had invited me to talk with them about issues I raise in my book, Africans and Americans. She told me they would all have read it in preparation for my visit. This is the ideal arrangement, since it creates the opportunity of focusing on problematical or outstanding issues. 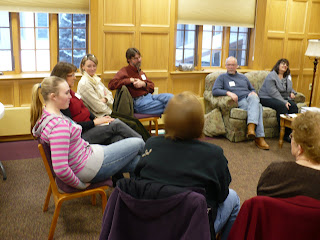 I enjoyed meeting these people. I felt as if I were in the company of people who knew me well through what I say in the book. There was no need to worry about breaking the ice or establishing rapport. In my remarks, I just stressed several basic lessons I have learned about living in a different culture and writing about cultural differences. I confessed that the greatest challenge of writing my book was discovering my own biases and fighting against them. 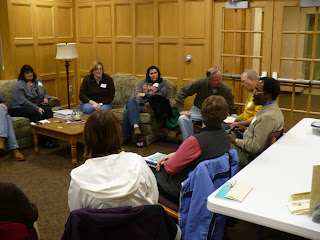 Because these people were going on a medical mission, we dwelt a little bit on the cultural issues relating to medical work. I have said a few things about this in my book, and I have also been learning much from my involvement in orientation activities for college students going on health-related study abroad in Tanzania.

Some of the people had studied at St. Olaf College, and they regaled me with their Ole memories and folklore. One doctor had a copy of my Matengo Folktales and started a conversation with me on it. She noted, for example, the different ways Hare is portrayed in Matengo folklore compared to the American traditions such as the Easter Bunny. I was delighted, as I had never thought about these comparisons. Diane even mentioned my Notes on Achebe's Things Apart. I felt I was in the midst of people who really want to be well informed prior to traveling abroad. Being an alumnus of the University of Wisconsin, I enjoyed this visit in other ways as well, since it brought back memories of my graduate school days in the Badger state.
Posted by Mbele at 12:38 PM

Just an FYI, wanted to share a blog we did today (please feel free to cross-post) about our travels in Lilongwe, Malawi. We blog everyday from all over Africa at a website call Border Jumpers (http://www.borderjumpers.org) and for the Worldwatch Institute's Nourishing the Planet (http://blogs.worldwatch.org/nourishingtheplanet/).

All OUR best, Bernard Pollack and Danielle Nierenberg

Thank you very much, Bernard and Danielle, for sharing this information. You are doing wonderful work and I will be following it.