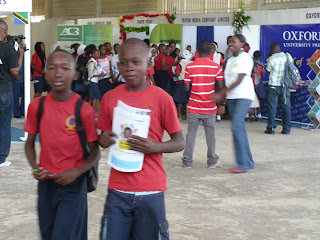 On June 24-25, I attended an educational and careers exhibition at the Diamond Jubilee Hall in Dar es Salaam. It was organized by Tripod Media, a company with a broad portfolio ranging from event promotion to video production. I do not remember how I came across the information about this event, but I saw it in the USA. I looked for more information and discovered Tripod Media and its founder, Dorothy Kipeja.

Tripod Media did a great job of organizing and advertizing the event. A number of companies and organizations participated. I got to know several. One of these was the Tanzania House of Talents (THT). I had heard about this organization but had not had the opportunity to meet them. I visited their booth, where they had live music and talked with their coordinator and got their brochure.

I saw school children who visited the the THT booth coming on stage to sing some songs. This was a pleasant thing to witness. It reminded me of a similar thing I witnessed on Tanzanian TV a few weeks earlier: children joined artist Mrisho Mpoto in singing his songs as he was performing in the street. What a remarkable display of synergy between artist and audience.

On this day, I also got to know the Proactive Employment Solutions, which describes itself as “a private labour recruitment agency based in Dar es Salaam.” I also got to know the Tanzania Schools Collection, an enterprise that seeks to list and profile educational institutions in Tanzania, with the intention of extending the coverage to East Africa and beyond.

I took this opportunity to present Africonexion, my cultural consulting company to the Tanzanian public. I had a booth where I displayed my books and talked with people about the work of this company and its vision for the future, which includes establishing itself in Tanzania, East Africa and elsewhere.

I was impressed by the diversity of the people who did come: different races, ages, and backgrounds. I hope that in the future more people will attend such events, including government officials, professionals, graduates, entrepreneurs and job seekers.
Posted by Mbele at 3:14 AM