Another Conversation With Patrick Hemingway 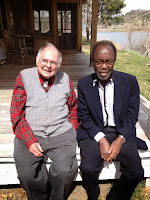 On May 22, I called and talked with Patrick Hemingway again. I wanted to tell him about Papa's Shadow, Jimmy Gildea's documentary about Ernest Hemingway, which drew from my Hemingway in East Africa course. He was happy to know that he will soon be able to see the documentary. When I told him that I had watched and liked it, he said: "Since you liked it, we will like it too." He meant his wife Carol and himself.

As always happens when I call Patrick, we talked about many things, from his time in Tanganyika (later Tanzania), including places such as Iringa, Rukwa, Babati, Moshi, Dar es Salaam and Pangani. We talked about his father, Ernest Hemingway's experiences, from bull fighting in Spain to fighting tsetse flies in the Tarangire National Park, Tanzania.

I told Patrick that, as we were talking, I had, in front of me, the book Hemingway on Hunting, which carries his Foreword. That led us to talking about Hemingway's ideas on hunting, and I said I like to think of Hemingway as a philosopher, since he theorized about hunting and defined true hunting as  as an artistic pursuit, contrasting it with what he called shootism.

To my great amazement, Patrick told me that a new edition of Green Hills of Africa is in the pipeline, and that it contains his mother Pauline Hemingway's diary, which she wrote during the 1933-34 trip with Hemingway in Tanganyika. I was thrilled to hear this. I told Patrick that I knew about this diary and that for years I had been thinking about going to Stanford University where it is kept, to read it.

We dwelt on Hemingway's encounter with the person he calls Kandinsky in Green Hills of Africa. who was actually a real person, Hans Koritschoner, an ethnologist popularly known as Hans Cory. We talked about how, after his encounter with Kandinsky, Hemingway traveled to Tanga and onwards to Lamu, on the Kenya coast.

We talked for one hour and fifteen minutes. As usual, when I spend so much time talking with Patrick, I start thinking about his age, fearing that I might be straining him too much. I start telling myself that perhaps I should suggest that we end our conversation and talk another day. Accordingly, I cautiously mentioned that I was afraid of tiring him out and that perhaps we should talk another day.

Patrick quickly calmed my fears, saying there was really nobody for him to talk with about Africa. He said that people tell him about their trips to Africa and all they talk about is the animals. With that, we continued our conversation. He continued sharing with me his memories and ideas about many things, such as the experience of colonialism in Africa, relations between Europe and the Americas, the problems of urbanization in the world and the state of African cities, the migrations of animals in south Africa and in the southern highlands of Tanganyika.

There is no way I can report in this blog post everything we talked about. I need only express, once again, my admiration for Patrick's prodigious memory and my gratitude for his graciousness and generous spirit.