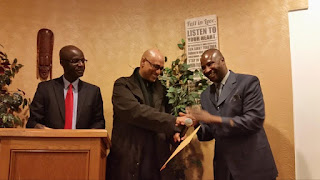 I am a relative new comer to Tempo Afric TV, having been introduced to it last year by Petros Haile, who interviewed me on issues pertaining to my book, Africans and Americans: Embracing Cultural Differences. However, having attended the Tempo Afric TV event on Saturday, I am more inspired than ever to fully involve myself in its work, so noble and indispensable.
Posted by Mbele at 7:58 PM