My Visit to the Hemingway Home and Museum in Oak Park 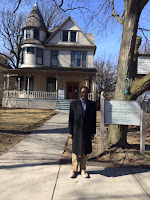 Yesterday, for the first time, I visited the Hemingway home and the Hemingway Museum in Oak Park, Illinois. I had wanted to do so for some years, as my interest in Hemingway grew and deepened. Yesterday, our group of five visitors was taken around the house by Michelle, one of the tour guides. 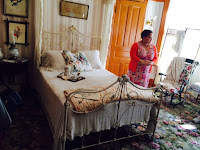 There are many things to see in this house: a sitting room, a dining room, a kitchen, a library, and bedrooms. The are many items of furniture, kitchen appliances and utensils, as well as photographs. We learned that this house was one of the earliest in Oak Park to have electricity. We were delighted that we could take pictures freely, in the house and in the Museum. 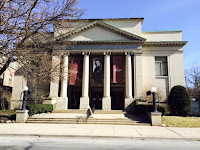 On the left is the bedroom in which Ernest was born. It was good to be taken back in time and learn that in the early days of this house, and when Ernest Hemingway was a child here, this area stood on the edge of the wilderness, and some of Ernest's earliest encounters with wildlife and the outdoors took place here. Animals and birds were hunted, for meat for the family. Ernest's mother, passionate about music, sought to inculcate the love of music in the whole household. Parents sat around and listened to the little Ernest's tales of adventure, even fabricated ones.

After about an hour in the Hemingway house, I walked the short distance down Oak Park Avenue to the Hemingway Museum. This is a rich repository of materials, including photographs, reports and captions, memorabilia from Hemingway's war experiences in Europe. and a lengthy documentary by the BBC which can only be viewed here. 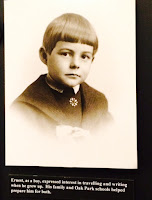 I was particularly touched by materials relating to Ernest's early school days, including photos and information about his teachers, such as the English teacher who supervised the publication of the student newspaper for which Ernest wrote. I knew about this early writing experience of the young Ernest, but the Museum provided more information. I got a clearer sense than before of the background he had when he went to Kansas City as a teenager and worked as a cub reporter for the Kansas City Star.

In the Museum I also saw Ernest's statement from this tender age that he wanted to write and travel. I had known for years that as a school boy, Hemingway had written that he wanted to explore far away places when he grew up. I was delighted, nevertheless, to encounter in the Museum a reiteration of those sentiments.
Posted by Mbele at 8:49 PM