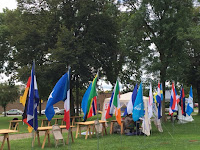 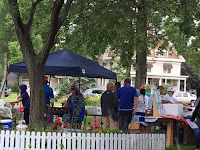 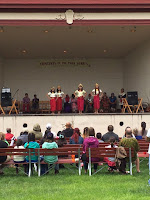 The Faribault International Festival took place today. I had hoped to set out from Northfield at around 9:00am, but it was raining. I waited, knowing that the Festival would not start while it was raining. Eventually, at around 10:30am as the rain got down to a slight drizzle, I set out. I got to the Central Park in Faribault, the Festival venue, at 11:00 am. The drizzle had not stopped, but vendors booths dotted the area, under tents of various colours and sizes. Flags of different countries stood in the center, hardly fluttering because they were wet. 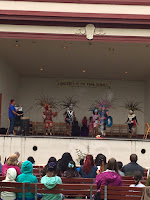 I did not set up my table right away, hoping that the drizzle would stop. Instead, I decided to walk around, checking out the booths. Only several minutes passed before I saw two ladies, I knew. I joined them in their booth and we talked for a while.

The clouds cleared somewhat and the sun shone down. Soon several dance groups appeared on stage in succession. One of the groups performed a Somali dance, something I had not seen before at the Faribault International Festival. In any case, the Somali population of Faribault, which in the earlier years of the Festival appeared reticent, has in the last few years come to embrace the Festival. I consider this clear evidence of the positive impact of the Festival. 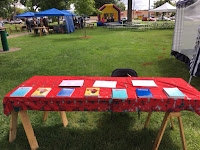 While the dance performances were in progress, I set up my table and had the opportunity to talk with people who stopped by. I knew several of them. Several I had forgotten, but they remembered me from past years. We had good conversations about my books, my teaching, and my work as a cultural consultant. It was exciting, as usual, to share jokes and anecdotes about the differences between African and American culture. 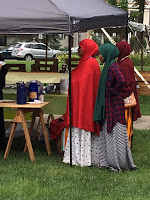 I had the longest conversation with a woman who showed great interest in literature, and was particularly interested in my work on Ernest Hemingway.


As a regular participant in the Faribault International Festival, I note some unique elements every year. Apart from the increasing participation of the Somali population, I saw today, a booth displaying information about Islam. I thought this a very valuable addition to the Festival. 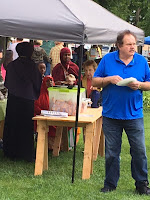 I wish to commend the Faribault Diversity Coalition for organizing the Festival, which is a great opportunity for people of different cultures to learn about one another.
Posted by Mbele at 10:02 PM