How I Missed "Woza Albert" at the Market Theatre, Johannesburg 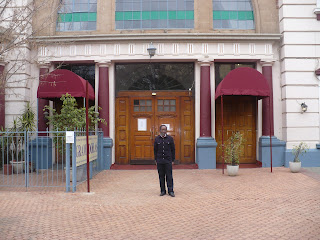 From 14 to 18 June, 2012, I was in Johannesburg attending the ACLS African Humanities Program conference, which I mentioned on my Swahili blog. On June 17, with several other conference participants, I went on a tour of Johannesburg.

One of the places we visited was the Market Theatre, a famous institution in the history of South African drama, which we associate distinguished theatre personalities such as Barney Simon, Athol Fugard, Percy Mtwa and Mbongeni Ngema. 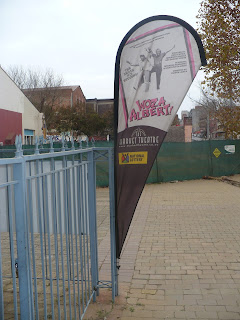 As our tour guide walked with us around the area called Newton, I did not know which sites we were going to see until we encountered them. On hindsight, I appreciate the tour guide for keeping it that way. Suddenly, I saw posters advertising a performance of Woza Albert, and I realized that we were approaching the Market Theatre.


Inspecting the poster, I realized that the performance was due to start in two hours time. Unfortunately, our tour schedule prevented us from staying there that long. That is how I missed the chance of a lifetime.

We did, however, enter the building to take a look. I couldn't believe that I was in such a hallowed space. I was grateful on my own account and because my visit there gave me something to share with my students.

In teaching South African Literature, I had on several occasions shown students a video recording of a performance of Woza Albert. Now, visiting the Market Theatre, I thought that, no matter who the actors were, it would have been a great experience watching such a performance there.
Posted by Mbele at 7:50 PM