I will always remember 23 November, 2017. First it was Thanksgiving Day, a major American holiday. That is not a unique event, since it occurs every year. What was special, about that particular Thanksgiving Day, however, was that my book, Matengo Folktales, was mentioned on the "Jeopardy" television show which many Americans watch. I don't know how I ended up on this show. 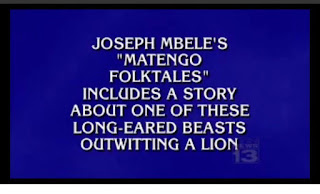 I didn't know much about "Jeopardy," but the appearance of my book on the show has opened my eyes as I witness the reactions of people around the country. The chairman of my Department at St. Olaf College wrote to faculty and majors: Congratulations to Joseph Mbele for an honor that few of us will ever achieve--being mentioned in a clue on Jeopardy! See the image below, referencing Joseph's "Matengo Folktales" book....


In the YouTube recording below, my book is mentioned starting at the 15:29 minute point.