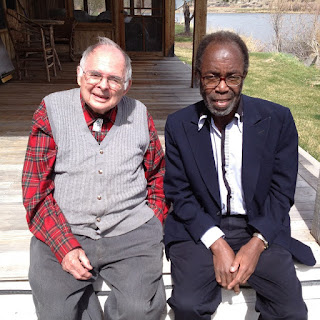 I called him and he answered the phone right away. Despite his advanced age, he has no problem remembering me and my voice. I had hardly greeted him when I said Happy Birthday. He sounded more lively than he has been for many months.

I thanked him for all he has done to help me in my study of Ernest Hemingway. We went on to chat about Ernest Hemingway, of course, and we focused in particular on the mystique of Hemingway and how Hemingway himself delighted in not just letting it flourish but also stoking it with his own imaginary tales which he passed off as true. Patrick mentioned Hemingway's alleged affair with Mata Hari story and I mentioned Hemingway's tale of a love affair and marriage with Debba, the Kamba woman in Under Kilimanjaro.

Patrick has always expressed his support and admiration for my efforts to articulate an African perspective on Hemingway. I am touched also, by how he likes my book, Africans and Americans: Embracing Cultural Differences, which he calls "a tool of survival" for Americans. He lived in my country for twenty five years and knows what he is talking about.

I am happy to have talked with Patrick on this special day.
Posted by Mbele at 9:53 PM