A Meeting With Atum and Ahmad Azzahir 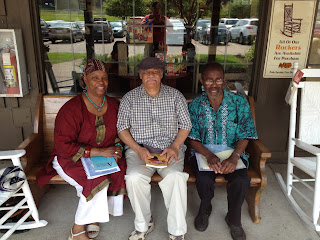 Today, I had a meeting in Lakeville, Minnesota, with Atum and Ahmad Azzahir, remarkable educators who specialize in working with people of African descent. I mentioned them several days ago in this blog, having met them at the Power of Unity Summit organized by the Council on Black Minnesotans.

We explored our interests and philosophies as educators. We discussed the need for the decolonization of the mind as articulated by people like Frantz Fanon, Julius Nyerere, Walter Rodney, and Ngugi wa Thiong'o.

Atum spoke of her work with the Cultural Wellness Center, which is based on the premise that many of the pathological conditions afflicting people of African descent stem from the isolation, dislocation and alienation of contemporary life. What a great idea, I thought to myself. Ahmad directed our attention to issues of African philosophy and value systems, such as described by Julius Nyerere.

We all agreed that if we could recapture the communalistic ethos of traditional Africa, we would go a long way towards healing our contemporary communities. I highlighted the values embedded in folktales and proverbs as examples. Though the values of capitalism--materialism and individualism--permeate our world, we need to create space for an alternative, humanistic value system.

I was happy to share my experience as a researcher and interpreter of oral folklore, which embodies the philosophical, ethical and aesthetic knowledge and heritage of the Africans. I had brought copies of my books, which Atum and Ahmad are seen holding in the photo.

Although I had known about the work of Atum and Ahmad for many years, our first meeting--a brief one--was during the Power of Unity Summit. We resolved to look for an opportunity or opportunities to meet and discuss issues of common concern. Today we had our first meeting. We met for three hours, and yet the time seemed to just fly by.

We look forward to more meetings, more discussions. Despite the challenges involved in trying to get people out of conventional patterns of thought about their place in the world, their identity, and the need to decolonize the mind, the possibilities and prospects are endless.
Posted by Mbele at 6:57 PM