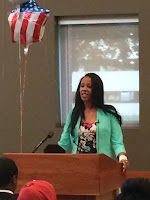 On Sunday August 2, I got a Facebook message from my friend Peter Magai Bul who lives in Chicago telling me that a sister, Seenaa Oromia, activist and author of The In-Between: The Story of African Oromo Women and the American Experience, was coming to Minneapolis to do a book signing the following day. I had not heard about this author and about the event, and I thanked Peter and told him I would make every effort to attend. 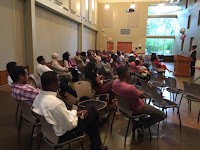 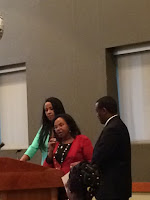 I did go. When I arrived, the proceedings were underway. There were quite many people in the audience, and several people kept coming. I even saw two young women and one young man who had been my students at St. Olaf College. We were delighted to see one another. 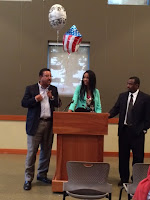 Then Seenaa was invited to speak. She talked about her upbringing in Oromia and how her mother inspired her to be strong and self-confident and to value education. She talked about the sorry condition of women and the need to fight for women's rights and called upon religious leaders--Christian and Muslim--to use their influence in society to advance those goals. 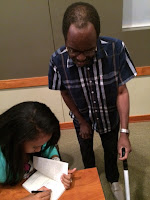 Then there was a question and answer session. When this was over, a book signing followed. She signed the books while photos were being taken. As I approached the table, Seenaa recognized me, recalling that Peter Magai Bul had told her about me. Needless to say, we were delighted to meet and had our pictures taken. 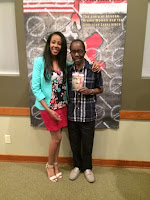 I learned much that evening and met some new people. I was impressed by the turnout for the event and how attentive and engaged the audience was in the presentations and discussions.


I have begun reading The In-Between, eager to learn more about issues concerning the Oromo--especially women--from a woman's perspective. It is clear, right from the beginning of the book, as it was from her talk, that Seenaa sees the issues as not only specific to the Oromos but as universal.

I wrote about this book event on my Swahili blog, but when word of it spread, several Oromos inquired about it, and I promised I would write in English as well.