I am a great fan of the Peace Corps, and have been for many years. So, when I learned that there was going to be a Peace Corps and Africa Conference in Madison, Wisconsin, I decided to go.

The conference, held March 24-27, brought together returned Peace Corps volunteers who had served in various countries as well as prospective volunteers, and, of course, fans of the Peace Corps like me.

This is the 50th year of the Peace Corps, and the Madison conference was one of the commemorative events taking place in different parts of the USA.

I learned a great deal from the speeches and other presentations, about the beginnings of the Peace Corps and the work of Peace Corps volunteers all over Africa. We heard tales about President John Kennedy who inspired Americans with the idea of service, and we heard about Sargent Shriver, the visionary and charismatic founder of the Peace Corps.

There were many people in this meeting, including ambassadors, educators, business people, writers, and students. 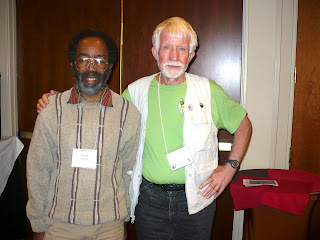 I met Mark Green, who had been the U.S. Ambassador in Tanzania, 2007-2009. I met several University of Wisconsin-Madison professors I had known from my days as a graduate student, including Professor Harold Scheub, who had been my main dissertation advisor. 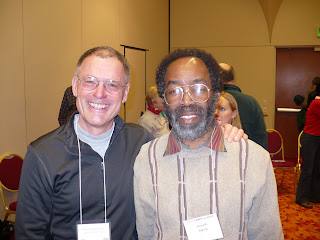 On the left I am standing with Wade DallaGrana, whom I got to know when I arrived in Madison in 1980. He had returned from serving as a Peace Corps volunteer in Lesotho, and we used to meet often and chat. The Peace Corps meeting in Madison was a big event for us, since we got to see each other after about thirty years.

I have much to say about the Peace Corps conference, and I plan to write more about it, if only as a tribute to these amazing volunteers, whose dreams, thoughts, and feelings are squarely focused on service to others and building a better world. Being around such people is truly inspiring.
Posted by Mbele at 7:21 PM