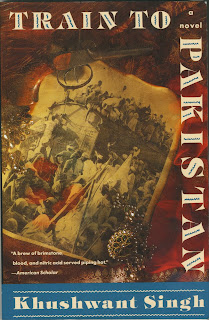 For many years, I knew about Khushwant Singh's Train to Pakistan. I knew that on the question of the Partition of the Indian sub-continent, this was the book to read. While teaching Indian Literature, I mentioned it again and again. It is only this month, however, that I have been able to read Train to Pakistan, as part of the readings for my South Asian Literature course.

Having just finished reading it, I am happy I placed it immediately after Ahmed Ali's Twilight in Delhi. There are significant overlaps between the two. I am also happy that after Train to Pakistan, we will be reading Bapsi Sidhwa's Cracking India. I have taught Cracking India, a novel that brings up some of the very issues we encounter in Train to Pakistan.

Train to Pakistan centers around the village of Mano Majra, populated by Hindus, Muslims, and Sikhs. They have their places of worshop there and live in harmony. As the killings in Pakistan and India grow more feverish and Muslims escape to Pakistan and Hindus to India, the village of Mano Mijra struggles with very difficult questions: whether to ask the Muslims to go or to let them continue to live in the village in accordance with age-old customs of hospitality.

Train to Pakistan is a gripping story, in many ways. I had read about the Partition and Indian Independence, but this novel gives a human face to the historical accounts, in the sense that it explores the impact of the Partition on human beings. Its exploration of bigotry and tensions between Hindus, Muslims, and Sikhs ought to make us take a close look at ourselves.

In discussing this novel, I mentioned various other works that contain the same theme: In the Book of Dede Korkut Muslims long for and celebrate the killing of infidels. In the Song of Roland the Christians long for and destroy Muslims. I mentioned Gassire's Lute, the West African epic in which we hear disparaging comments about the dog like Borama. I also mentioned the American bishop who said: kill a commie for Christ.

Even though, in this novel, we are encountering fictional characters, we can hear and feel what they are going through and what they are thinking about. We experience the life they live where they live; we see the sights, hear the sounds, and smell the smells. As Hemingway would say, Train to Pakistan is a true book.

Train to Pakistan is a gripping novel, whose events are foreshadowed on the very first page:

The summer of 1947 was not like other Indian summers. Even the weather had a different feel in India that year. It was hotter than usual, and drier and dustier. And the summer was longer. No one could remember when the monsoon had been so late. For weeks, the sparse clouds cast only shadows. There was no rain. People began to say that God was punishing them for their sins.

Interestingly, the trains we read about are all coming from Pakistan, laden with dead bodies of Hindus and the lucky few who are not dead. Only in the end is there a story of a train going to Pakistan. There is suspense surrounding the approach of this train, with a stunning surprise ending as Juggat Singh, whose image has all along not been particularly good, commits an unexpected, breathtaking act of heroism and bravery, foiling a well planned ambush and massacre of the Muslims traveling on this train. Juggat Singh dies as the train proceeds to Pakistan.
Posted by Mbele at 3:10 PM

Must be an enjoyable read Train to Pakistan by Khushwant Singh . loved the way you wrote it. I find your review very genuine and orignal, this book is going in by "to read" list.

Thanks for your comment. I found this to be an engaging novel, and so did my students.