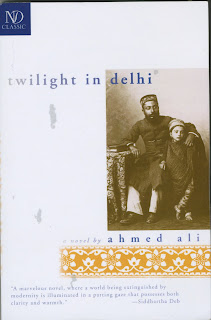 My South Asian Literature class in now comfortably underway, in its fourth week. We started with Mulk Anand's Untouchable, which I have taught many times. We then studied Ahmed Ali's Twilight in Delhi, which I had not read before.

Never having read a novel about the world of Indian Muslims, I found Twilight in Delhi refreshing. Fortunately, I know something about Islam, especially coming from Tanzania, a country where about half of the population is Muslim and about half Christian.

I spent considerable time explaining Islamic principles to my students, as a way of establishing the groundwork for discussing Twilight in Delhi. I described the five pillars of Islam and showed three videos: this one, which presents the Islamic call to prayer; this recitation of the Quran; and a small boy's recitation of Surah Yasin.

Twilight in Delhi deals with such themes as patriotism, love, and marriage. It portrays family life, wedding customs, healing and burial practices. From its very beginning, Twilight in Delhi exudes nostalgia for the Delhi of the past, whose grandeur and magnificence fell apart as a result of British rule.

This novel presents the fate of Delhi as a metaphor for the human condition. In ways reminiscent of existentialist writings, characters in Twilight in Delhi contemplate and talk about the meaning of life and the transience of human achievements. This reminds me of Al-Inkishafi, the classic Swahili poem, which reflects on the demise of the old famous Swahili cities, making us wonder about the meaning of life itself.
Posted by Mbele at 6:59 PM