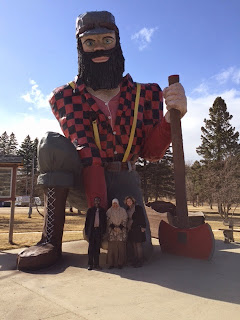 On April 2, 2015, several colleagues and I traveled together from Minneapolis to a conference at Leech Lake Tribal College. Deborah Jane, who was driving, and who knew the area we were going to, suggested that we stop at Akeley, to see the statue of Paul Bunyan.

We did, and what an opportunity it was, to see that massive statue of Paul Bunyan with his axe. We took photos, such as the one on the left, which shows us dwarfed by the statue. 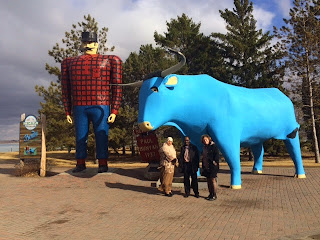 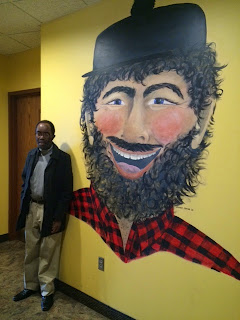 We continued on our way, towards Bemidji. As we entered the city, before we stopped anywhere else, Deborah took us right to another Paul Bunyan statue, featuring Paul Bunyan with his blue ox.

The story I had heard concerning a Paul Bunyan statue in Bemidji mentioned the blue ox. This was it, another massive statue, as you can see in the photo on the left.

I saw the influence of the Paul Bunyan legend everywhere in this part of Minnesota: Paul Bunyan businesses, and even a Paul Bunyan street. At the entrance of the restaurant attached to the Hampton Inn, where we stayed, there was a Paul Bunyan mural, which you see in the photo on the left, with me standing next to it.

As a folklorist, I greatly appreciate these encounters with a famous American legend, about which I knew even before I came to the USA. In my folklore courses I include American folklore, and now I will be able to talk about these personal experiences with the Paul Bunyan legend.

In both Akeley and Bemidji, there is a museum next to the Paul Bunyan statue. I am dreaming of someday going to do research in those museums.
Posted by Mbele at 1:13 PM