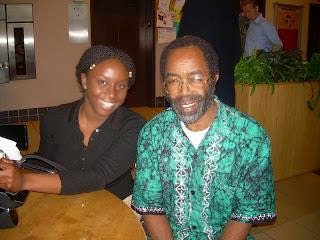 Like countless other people around the world, I am an ardent admirer of Chimamanda Ngozi Adichie's works. I first read and taught Purple Hibiscus, her first novel, in 2006, reading as I taught.

Then she published Half of a Yellow Sun. On October 14, 2006, she introduced it at the Twin Cities Book Festival in Minneapolis. I attended her reading and book signing and posed for a picture with her.

Proud of my signed copy, I was sure that someday I would teach Half of a Yellow Sun. I did, in the summer of 2013. I had thought that given the sadness and tragedy of its theme, this was a bitter novel. I was surprised to discover, as we moved through it, a story of the resilience of the human spirit.

I then decided to teach Americanah, which I did this semester. A dazzling artistic tapestry, it explores themes such as immigration, relationships between men and women, and between races, with remarkable insight and sophistication. I enjoyed Ifemelu's reflections on American culture, often resembling my own in Africans and Americans: Embracing Cultural Differences.

Ifemelu, the main protagonist, shares her reflections on these themes through her blog, and the very theme of blogging, so pervasive in Americanah, reminded me of the conversation I had with Adichie on the day we met. She talked about a blog she was involved with, which was dear to her.

Now, I am preparing to teach a summer course on African Literature. I have already decided to include Adichie's The Thing Around Your Neck, which I have not read. I have no doubt that it is going to be a great experience for my class.
Posted by Mbele at 9:18 PM

Email ThisBlogThis!Share to TwitterShare to FacebookShare to Pinterest
Labels: Africans and Americans: Embracing Cultural Differences, Americanah, Chimamanda Ngozi Adichie, Half of a Yellow Sun, Purple Hibiscus, The Thing Around Your Neck