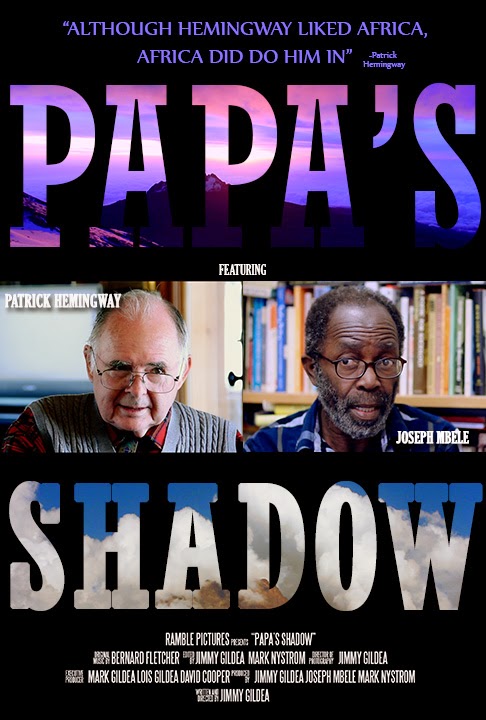 A 2014 graduate of St. Olaf College, Jimmy Gildea has embarked on a career in filmmaking. After several years of hard work, he has produced Papa's Shadow, his first film (2015 Ramble Pictures, LLC). He is already working on his next one, "A Place Called Nowhere," about refugees at Kakuma refugee camp in Kenya.

Since, alongside Patrick Hemingway, the only surviving child of Ernest Hemingway, I feature prominently in Papa's Shadow, I will let others comment on it. However, the film comes with the following description:

YOUNG FILMMAKER JIMMY GILDEA DOCUMENTS HIS EXPERIENCE WHILE STUDYING HEMINGWAY UNDER THE INSTRUCTION OF AFRICAN AUTHOR JOSEPH MBELE, JOURNEYING ACROSS MIDWEST AMERICA, THROUGH THE SERENGETI PLAIN AND UP THE STEEP CLIFFS OF MT. KILIMANJARO.

HEMINGWAY'S SON PATRICK AND MBELE ENGAGE IN AN INSPIRATIONAL AND REVEALING CONVERSATION REGARDING THE FAMOUS AUTHOR'S FASCINATING RELATIONSHIP WITH EAST AFRICA.

THIS PERSONAL AND EMOTIONAL FILM EXPOSES MANY ANSWERS TO QUESTIONS HEMINGWAY FANS HAVE ALL BEEN WAITING FOR. 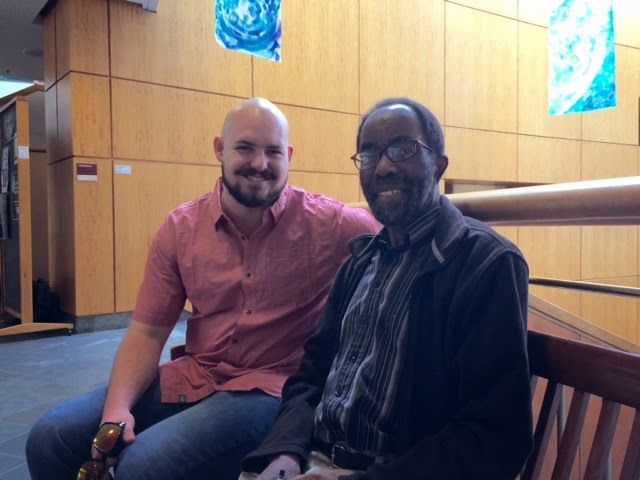 Jimmy and I have been in constant communication from the time he enrolled in my Hemingway in East Africa course, several years ago. We took the photo featured here on April 21, 2015, when he visited me at St. Olaf College to talk about Papa's Shadow.

Jim says that these films will be premiered at festivals in America throughout the year. Eventually, they will be available for purchase. I will keep readers of this blog posted on these developments.
Posted by Mbele at 5:51 PM