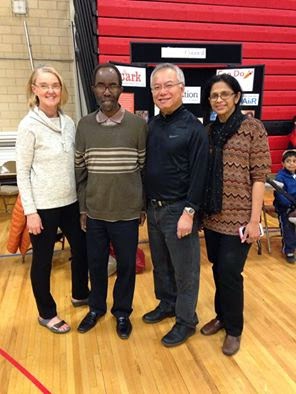 On April 11, I attended the World Festival in Rochester, Minnesota, an annual event organized by the Rochester International Association.

I am drawn to such events because I value and enjoy participating in efforts to build bridges and foster understanding among the world's diverse cultures.

Over the years, I have helped organize and participated in such events, mostly in the Twin Cities area. This was the first time I was attending the World Festival in Rochester, representing Africonexion: Cultural Consultants and the Afrifest Foundation.

One of the major attractions of such events for me is encountering the unexpected. At the World Festival, for example, I stumbled upon members of the Rochester Diversity Council.

I believe I first heard about the Council when I was serving on the board of the Faribault Diversity Coalition. But I had never actually met any of its members. I was therefore delighted to meet Al Lun, who told me he was a member of the Rochester Diversity Council and promptly led me to their booth where he got us to pose for the photo featured here.

Although we did not have much time to talk, since I had to continue taking photos of the exhibitions and performances, before returning to my table, I shared a copy of my book, Africans and Americans: Embracing Cultural Differences, with a view to continuing the conversation.

I wanted very much to share this photo on my blog, since it captures our joy and excitement upon meeting. I also like the way it mirrors the diversity of the world's people, so congruent with the theme and spirit of the World Festival.
Posted by Mbele at 9:57 AM