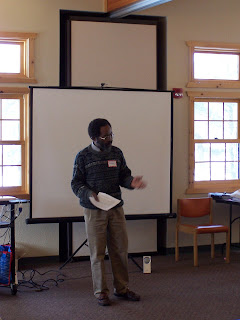 I just received an invitation to participate as a presenter in a Retreat scheduled for March 26, 2009. This is a gathering of Lutherans involved in building relationships with fellow Lutherans in Africa and elsewhere. We had a similar retreat at the same place last year, which I mentioned here.
Apparently, that retreat went so well that the organizers wanted to have it again. While the topic last year was Mission and Accompaniment, this year it will be Culture and Companionship. I am pleased to be invited as a presenter again, delighted that the retreat is going to focus on culture, a topic most dear to me.

I look back on the experience of last year, and the discussions we had, of the theory and practice of Accompaniment as articulated by the Evangelical Lutheran Church in America, the discussions of the challenges and opportunities of establishing partnerships between American congregations and congregations in Africa and other parts of the world. I recall, as well, the warm fellowship that pervaded our gathering. 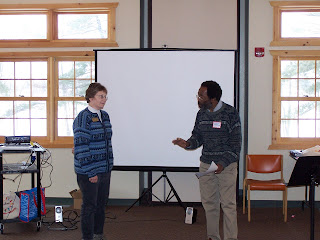 Here I am with a fellow presenter on that day, sharing ideas. 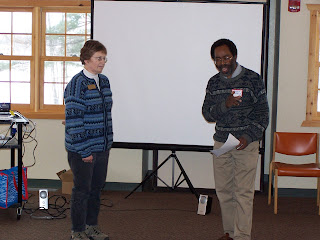 Sharing ideas with a fellow presenter. 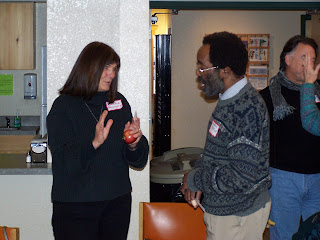 Talks in small groups are a great way to consolidate and expand on what transpires in the larger gathering. 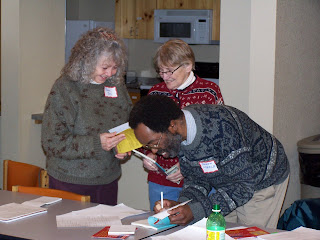 I had been asked to bring my books, and here I am signing copies. 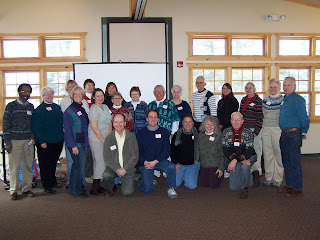 We took a group photo, to record this memorable day.

With all these memories alive in my mind, I look forward to the forthcoming Retreat. I look forward to intense and valuable conversations on the place of culture in human interactions. I believe strongly that, perhaps more than anything else, cultural differences are the most serious challenge we have to address when we seek to work with people of a different culture. Unless we understand them and find ways to leverage them, perhaps turning them into opportunities, the cultural differences will be a perpetual stumbling block or a nightmare.
Posted by Mbele at 3:12 PM No comments:

January 19 is Martin Luther King Jr. Day in the United States. Events are held all over the country commemorating the life and legacy of this great American.

In the small town of Northfield, where I live, we are having several commemorative events this weekend. We had the first one yesterday titled "Arts for Martin." People came together to pay tribute to Martin Luther King Jr., including community singers, school children, college students, drummers, and dancers. I was the featured speaker, making short speeches at three intervals between the performances.

As the director had suggested, I spoke about Martin Luther King Jr., Barack Obama, and what those two mean for us. I said that though we honour Martin so much, almost looking upon him as a supernatural being, he was an ordinary human being, who worked hard in school, struggled with life's challenges, and personal challenges, including struggles with matters of faith.

He came from a family of preachers, stretching all the way from his great grandfather and including his grandfather and father. All these were preachers, part of a tradition that preached the social gospel, not confined to theological matters and matters of worship alone, but deeply involved in addressing the needs of the disenfranchised, working with the poor, active in civil rights, voter registration, and so on.

The image we have of Martin Luther King Jr. leading demonstrations, such as the 1963 March on Washington, is part of this story, a story which permeates his speeches and writings. I mentioned, in particular, the famous "I have a Dream" speech and the "Letter from Birmingham Jail".

I mentioned Martin's statement that he dreamed of the day when "little black boys and black girls will be able to join hands with little white boys and little white girls as sisters and brothers." Martin dreamed on the day when his children would "live in a nation where they will not be judged by the color of their skin but by the content of their character."

I stressed that though this message was addressed to Americans, it speaks to the whole world. Though it appears to address whites, it applies equally to all of us; we should all judge people on the basis on their character, not their race, religion, ethnicity or other category.

Martin is known all over the world, and I focused on Africa, on Africans who judge and discriminate against others on the basis of religion, ethnic group, clan, and so on. Why do these Africans claim to be honouring Martin?

Like Martin, Obama was brought up in the African American religious tradition that stressed the social gospel. Upon graduating from Harvard, Obama became a civil rights lawyer and a community organizer in Chicago. In his writings and speeches, Obama has stressed the need for unity across races, genders, religions, ethnicity, and other categories. His message has been to affirm the dignity of every person, and belief in the potential of human beings to be the best they can.

I talked again about Africans, who have joined in such an euphoric manner in celebrating Obama's electoral victory. I wondered whether they are really honouring Obama. Do they celebrate him simply because he has African roots, or do they share Obama's values and vision? The paradox is that even Africans who are obsessed with their ethnic group, for example, and who despise and discriminate against other ethnic groups, claim to be celebrating Obama. How can Africans who are so obsessed with their clan or village or religion that they look down on others, claim to be honoring and celebrating Obama?

At this point, I saluted the Americans. At least they, in electing Obama so overwhelmingly, have taken a step towards realizing Martin's idea of judging a person by his or her character. America has not thereby become a perfect society, but the Americans can claim to have taught us a lesson.

So, while the Martin Luther King Jr. Day is a day of celebrating the legacy of Martin, it is also a day for asking ourselves some serious questions and reminding ourselves of the challenges that lie ahead.
Posted by Mbele at 5:04 PM 3 comments: 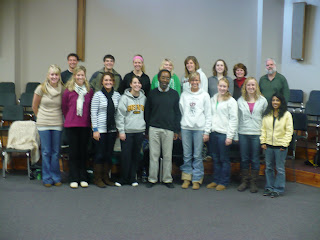 Today I went to Apple Valley, Minnesota, to speak with students from Gustavus Adolphus College on their way to Tanzania on a study trip. Their professor, standing second from the right in the back row, in the photo, had invited me to talk with them on differences between African and American culture. In preparation for our meeting and for the trip, she had asked them to read my book Africans and Americans: Embracing Cultural Differences which many colleges use for orientation of students going to Africa.

After my preliminary remarks, talking about my background and my passion for my work as a cultural mediator for Africans and Americans, we had a long question-and-answer session. It is always a delight for me to be involved in such encounters, since I not only learn from hearing my readers' questions, but I also get an opportunity to share whatever I can to make such people go to Africa with confidence and a sense of humour.