Writing About My Country

For about two weeks now, the idea of writing about my country has been foremost in my mind. How did it all start?

Certainly, Lonely Planet has something to do with it. I have been thinking about Lonely Planet perhaps more than at any time in the past, how its writers bring the remotest corners of the world into our lives. Lonely Planet has seen places I have not seen, and might never see, even in my own country.

Before Lonely Planet, however, there was Ernest Hemingway, one of the most gifted writers of all time. For me as an African, Hemingway is precious. His Green Hills of Africa described my country in ways hard to match, let alone surpass. His description of the land, the people, and the animals rings true on every page, as I noted in a previous post. He wrought the same magic, if not more, in his other African stories, including Under Kilimanjaro, published post-humously.

The desire to write about my country owes much also to Derek Walcott, the celebrated Caribbean poet and playwright, a Nobel Laureate like Hemingway, whose works I have read and taught for a number of years. These last two weeks, my thoughts have dwelt on Walcott squarely. What he says concerning his decision to write about his country is unforgettable. Growing up reading English poets, who celebrated, nay sanctified, their native land and its vegetation, such as the oak and the elm trees, the roses and the daffodils, he believed that English trees and flowers were the only ones worth writing about in poems.

He underwent a conversion later, wondering why the coconut and mango trees of his native Caribbean were deemed inferior to the elm and apple trees of England. He decided to strike in this new direction, writing about the coconut and mango trees, sanctifying them through poetry. In his poems and plays, he writes about his people: the fishermen, the fruit vendors, the workers in the tourist resorts. He brings the Caribbean to life, its complexity of colours and shapes, its ups and downs, its pains and hopes.

I think about my village and my home region, up in the mountains east of Lake Nyasa, and I think about Tanzania, my country. The dream of writing about it looms large on the horizon. I am not a poet, but working hard, I should manage to write some decent prose.
Posted by Mbele at 3:58 PM No comments: 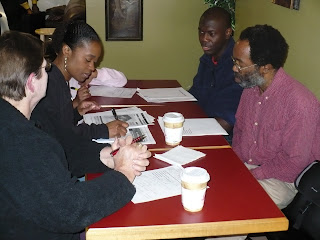 Members of the Afrifest Foundation met again today, at the 1st Cup Cafe in South Minneapolis. The main item on the agenda was planning for Afrifest, the Pan African cultural festival scheduled for August 7, 2010. 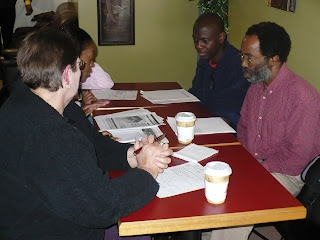 We received reports about several matters, including confirmation of the venue and an update on exhibitors and performers. Vendors are being lined up, and an art display is in the works. 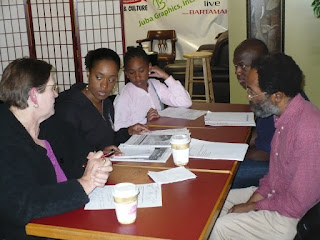 We will have a fashion show and musical performances. The Sojourner Truth Academy will do a step performance. The Pan African Historical Display will be there as well. 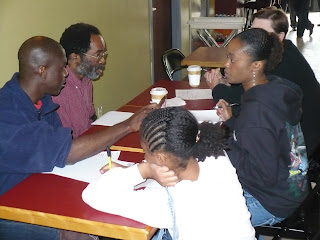 There will be food booths, art and craft displays, informational materials and books. There will be children's activities and games. 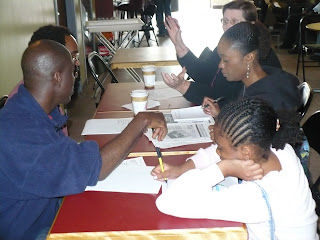 Afrifest 2010 promises to be an exciting and edifying event. To sign up as a volunteer, contact: volunteers@afrifest.org. Mark your calendar; spread the word, and be there.
Posted by Mbele at 6:43 PM No comments:

Towards the Pan African Summit, 2010

The Pan African Summit steering committee held another meeting today, at the Center for Families. At our last meeting, we had expressed the desire to reach out to more African Americans and had agreed that we could use the African American churches to reach that goal. 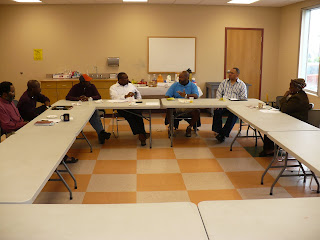 Thanks to the initiative of Edmund Ocansey, today we were joined by two special guests. One was Dara Ceasar, a social worker in the Minneapolis public schools, seen on the right in the photo above. She offered advice on incorporating children's events and activities in the Summit. 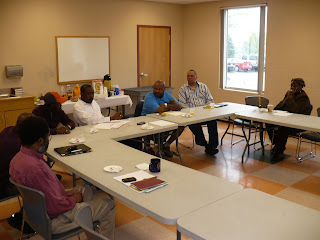 The other guest was Reverend Ian Bethel, second from the right in the photo above. You can watch some of his sermons on YouTube, such as this one. Reverend Bethel offered to help spread the word about the Summit. 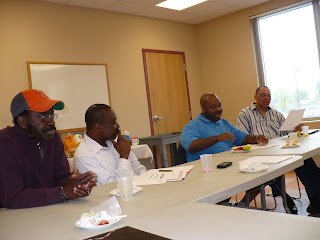 Also present was Dr. Richard Oni, seen on the left in the photo above. Dr. Oni is president of Minnesota Institute for Nigerian Development. With orgnizations such as MIND, the Africans in the greater Twin Cities area are easy to reach. Hence our view that we need to do more to reach out to the African American community. 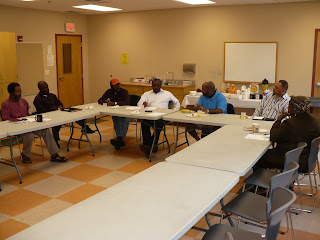 We brought up a number of ideas regarding publicity for the Pan African Summit, such as using Facebook and Twitter, as well as African newspapers such as Mshale and the African News Journal, and KMOJ radio station. 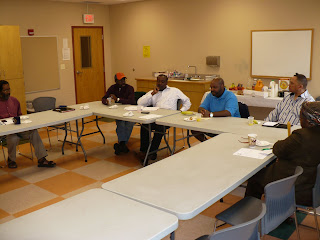 We will continue with our outreach to the African American churches, aware that it is easy to reach Minnesota Africans through their numerous associations, whether ethnic, national, or regional. 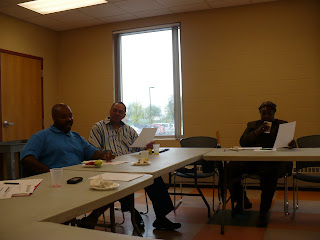 We reviewed the issue of sponsorships and will go ahead and invite businesses and organization to advertise in our Summit booklet.
Posted by Mbele at 6:33 PM No comments:

If you read this blog, even just casually, you will note that I often deal with the issue of encounters between people of different cultures. I speak with groups and individuals interested in, or challenged by, such encounters.

One thing I have learned is that our cultural heritage and identity work like an iron curtain. We find comfort and safety on our side of the curtain and view the other side--other cultures, that is--with sentiments ranging from suspicion and derision to puzzlement and horror.

A lot of misunderstandings and conflicts arise when we are dealing with people of other cultures because we stick to our comfort zone, our side of the curtain. We insist on seeing reality from our own perspective, and our perspective alone. We see our ways not only as normal but as normative.

We think the other people are strange or unreasonable, for example, or that they are awkward or rude. We don't realize that they might be thinking the same about us. They are as secure and comfortable on their side of the curtain as we are on ours.

The world is rapidly becoming a global village, with people of different cultures coming together and interacting everywhere. For our well-being and success in this village, we must bring down the cultural iron curtain and learn to see things not only from the perspective of our own culture but also the perspective of other cultures. This is a key message I deliver in my presentations, workshops, and publications.
Posted by Mbele at 4:07 PM No comments: 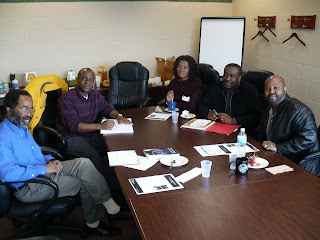 As the Pan African Summit approaches, the Planning Committee continues to prepare for it. On March 27, the Committee met again, at the Center for Families, to continue its work.
After a delicious breakfast, we got down to business, at 10:50, with Edmund Ocansey as chair. We had only one item on the agenda: planning for the Summit, which will take place on October 9, 2010. In previous breakfast meetings, as reported in various posts on this blog, we met to hear presentations on various topics of interest to our community. Those who might be wondering what this Summit idea is all about might wish to read about the first Summit. 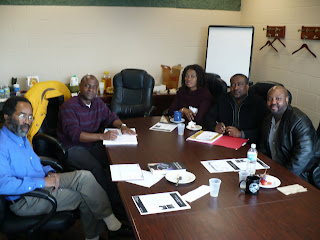 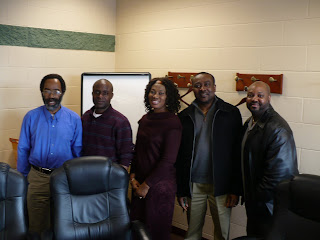 What on Earth is an iPad?

Like many people, I had heard that Apple was preparing to launch something called an iPad. I understood that it was some kind of reading device, but I am not really one of these high-tech folks.

The farthest I had gone in this direction is publishing my books online, and more recently, publishing them as e-books. I knew that you require an e-book reader, also known as an e-reader, to download and read e-books, or you could use other devices for the same purpose. I don't even have an e-book reader. All this iPad talk flew right past my ears.

Congratulations! Africans and Americans: Embracing Cultural Differences, one of the most popular books on Lulu, has been selected for submission to Apple's new iBookstore (accessible on the iPad)....

That woke me up. I started reading about the iPad, while taking the steps specified by lulu.com to prepare my book for the iBookstore.
Posted by Mbele at 1:15 PM No comments: