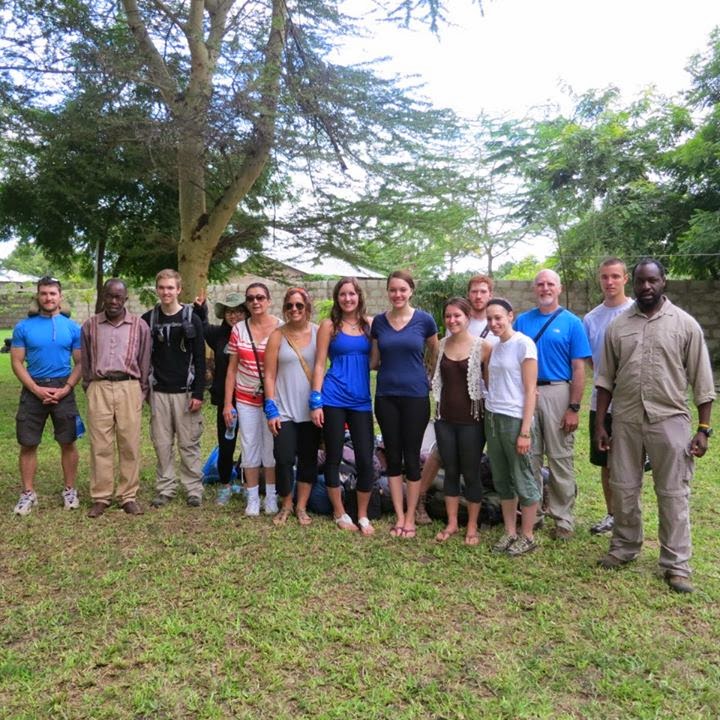 In mid January, 2013, I was at Mto wa Mbu, a small town in northern Tanzania. I was with 29 students from St. Olaf College, on an interim course titled "Hemingway in East Africa."

We spent several days at Mto wa Mbu, which Hemingway describes in his Green Hills of Africa.

On one of those days, I came across Protus Mayunga, a man I had not known before. We had a great conversation. It turned out that we had significant common interests, in fields such as cultural tourism.

He was there with a group of students from the State University of New York, Oswego, and their professor, Dr. Mehran Nojan. Protus who founded and runs a small tour company called The Roof of Africa Adventures, was in charge of the logistics of the group's travel, helping with cultural and other forms of orientation for them. You can see Protus at the far right in the photo.

In the morning, I went and met them at their hotel. I learned that they were in a program called Oswego Going Global. It is a program of travel and learning, which takes students to various parts of the world. In Tanzania, their experiences included climbing Mount Kilimanjaro, visiting the national parks, such as the fabled Serengeti, and getting acquainted with the local people.

I thought it was a great program and was impressed by the enthusiasm and resilience of the participants as they went through diferent places, some quite challenging. When we first met, Protus learned that I had written a book, Africans and Americans: Embracing Cultural Differences. He obtained the several copies that I had with me and that evening he shared them with his group. Apparently, they enjoyed reading it.
Posted by Mbele at 5:07 PM 2 comments:

I appreciate readers' comments on my writings, keeping in mind that they have spent valuable time reading what I wrote, but also sharing their views. They thus create a dialogue which I find enriching.

From time to time, I see such responses to my Africans and Americans: Embracing Cultural Differences. Several days ago, I saw, online, a report written by a member of a team that visited Tanzania recently, under the auspices of the Leadership Wisconsin:

In the United States we are accustomed to running from place to place, chasing time and cramming all we can into a day. In Tanzania we found a slower pace--we experienced "African Time." The day is not driven by the clock but rather shaped by people's relationships. It is accepted practice to be "late" as a result of lending a helping hand, catching up with an old friend, or extending hospitality to a stranger. This is something we learned prior to landing at the Julius Nyerere International Airport, having read "Africans and Americans: Embracing Cultural Differences" by Joseph L. Mbele as part of our seminar prework.

The report, available online, is titled "Safari of a Lifetime Part 1."
Posted by Mbele at 2:26 PM No comments:

I Did Not Teach the Ama Ata Aidoo Seminar

Unfortunately, I could not teach the Ama Ata Aidoo seminar I had planned to teach. I had health problems which led me to apply for six months of medical leave. After spending six weeks in hospital, I am still recovering at home. I hope to return to teaching in the fall.

As in previous years, I had big plans for the summer, but I have had to shelve them. I trust in God and   look forward to better days.
Posted by Mbele at 6:06 PM No comments: