Another Evening with the Nu Skool of African American Thought 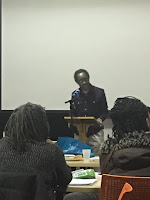 Yesterday evening, I was in St. Paul, Minnesota, attending a meeting of the Nu Skool of African American Thought. I had been invited to give a talk, as I reported on this blog. After consultations with me, Nu Skool facilitator Adrian Mack had formulated the topic of my talk as "Cultural Continuity From Africa to the Americas: Black Creativity and Resistance."

The evening started with announcements and a reading of a poem by Adrian Mack which dwelt on the historical experience of Africans and people of African descent. We split into small groups and discussed several issues, such as what resistance meant for us and how we conceptualized the continuity of African and African Diaspora cultural expression.

Then I was introduced to the audience, so I could initiate the main discussion. I started by observing that the previous remarks had highlighted the key issues I might have wanted to dwell on. However, I underlined what I consider most vital considerations.

First I said that in my role as a teacher of Literature and Folklore, I pay great attention to Africa as the cradle of the human race, which means that Africa is where language, literature and other forms of cultural production originated and evolved. I pointed to the present day Tanzania, Kenya, and Ethiopia as the places most closely associated with human origins.

I said that humans migrated from there to other parts of Africa and the world after having acquired the knowledge and skills required for survival and further development. Not wanting to dwell too much on this, I fast forwarded my account to Ancient Egypt, where writing evolved, enabling the production of written records, including religious teachings and folktales, such as the "Tale of the Shipwrecked Sailor" and "The Tale of the Two Brothers."

I talked about the "Tale of the Shipwrecked Sailor" as a precursor, so to speak, of tales such as The Odyssey of Homer, "Sindbad the Sailor," Daniel Defoe's  Robinson Crusoe, and Samuel Taylor Coleridge's "The Rime of the Ancient Mariner." Beyond the Ancient Egyptian tradition, for which we have written evidence, I dwelt on oral traditions that flourished in Africa, such as the ones which enslaved Africans brought to the Americas.

I highlighted the fact that these traditions expressed the African philosophy, value systems, imagination, aesthetic consciousness, and creativity. I cited proverbs as an example of how Africans thought about values and the human condition. In the absence of books, archives and libraries, each one of those ancestors of ours was a walking encyclopaedia, and a dynamic one at that, since there was unending interaction and communication between people, whereby each individual's knowledge  was being constantly refreshed and enriched.

Such is the heritage that enslaved Africans brought to the Americas. Tales, songs, proverbs, skills, customs, and beliefs were brought here, which have been extensively documented over the last two centuries or so. I mentioned, for example, the work of Zora Neale Hurston in the southern United States and the Caribbean. But, I noted, Africans were taken to other parts of the world also, where some distinguished themselves in various fields.

I gave the example of Antar bin Shaddad, the pre-eminent poet of pre-Islamic Arabia, who is still celebrated by the Arabs. I mentioned another black poet of Baghdad who was famous there at the beginning of the 9th century AD and then moved to Spain where he made significant contributions to Andalusian poetry. I also mentioned Alexander Pushkin, the father of Russian literature, who had African ancestry. The list of such notables is long.

If time had allowed, I would have told a tale or two with both an African and an African American version. In line with the theme of my talk, notably the idea of resistance, I would have wanted to focus on the trickster tale. Trickster tales in the time of slavery in the Americas, as well as songs of protest, even in the guise of spirituals, are most obvious expressions of black resentment towards and resistance to oppression. Tales such as those of High John the Conqueror, Shine, and Stackolee, not only served as a strategy of psychological survival through laughter at the expense of the slave master as he was outwitted by the tricksters, but also expressed the aspirations of slaves to triumph over the slave master. In all, there is much to say about folklore as both an expression and a vehicle of resistance.
Posted by Mbele at 9:32 PM 1 comment: 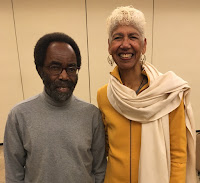 Ericka Huggins, a veteran of the Black Panther Party and an educator, spoke at St. Olaf College this evening as part of the Martin Luther King Jr. commemoration. Having witnessed and participated in difficult and dangerous struggles for justice, she stands tall as a testimony to the strength of the human spirit, warm and generous.

She shared a message of love and endurance in the face of adversity and suffering. She shared her faith in people, transcending racial, religious, gender, and other categories. She touched us deeply with her tenacious optimism about our common future as human beings. Visit her website.
Posted by Mbele at 10:33 PM No comments: 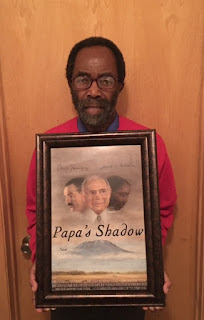 Papa's Shadow focuses on a dimension of Ernest Hemingway that is not well known: his life long fascination with Africa. In the course of studying Hemingway, I realized this deficiency and decided to create a course, Hemingway in East Africa, which inspired Jimmy Gildea, one of the students, to create Papa's Shadow. I highly recommend this documentary. To order it, contact Ramble Pictures. email: info@ramblepictures.com, telephone: (952) 426-5809.
Posted by Mbele at 3:11 PM 2 comments:

Another Day With the Tanzania Program of Gustavus Adolphus College 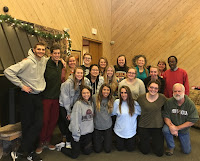 Today I spent several hours at the Mount Olivet Conference & Retreat Center talking with students of Gustavus Adolphus College who are going to Tanzania on a study program. They have been undergoing pre-departure orientation, and Professor Barbara Zust had invited me to speak with them, as I reported in a previous blog post.

As in the past, the students, have been reading my book, Africans and Americans: Embracing Cultural Differences, and my meeting with them was an opportunity for them to meet me and ask questions.

After introductions, I started by commending these students for their decision to go on a study abroad program and experience a culture different from their own. I shared my own experience in the U.S.A. and the positive effects it has had on me, enabling me to be a bridge, so to speak, between Africans and Americans.

With those remarks, the conversation began. The questions the students asked, concerning appropriate behaviour, not only showed clearly how well they had thought about what I say in my book, but also afforded me valuable opportunities to clarify what I had written as well as what I had not. I did say, however, that I have been aware, for some years, of the need to write on matters I did not address in my book, and that I am working on that project.

This was another remarkable group of students from Gustavus Adolphus College. We talked for over two hours and were very pleased, as the photo above shows. Professor Zust is seen in the back row, next to me, and in the front row, on the right, is Pastor Todd Mattson, co-leader of the program. The group departs for Tanzania on January 4. For updates, visit withonevoiceTanzania.
Posted by Mbele at 10:45 PM No comments: