The Ghost of Hamlet's Father

In the past several days, I have been reading Shakespeare's Hamlet, not only to experience again the power of a creative genius of unequalled talent, but in order to reflect on the ghost of Hamlet's father, one of the characters in that play that has always fascinated me. Ever since I watched a film version of Hamlet, in which Laurence Olivier played the role of Hamlet, I have remembered the ghost of Hamlet's father. This was in 1971, when I was a student at Mkwawa High School, Tanzania.

The ghost's eerie appearances in that film, and his voice,  have continued to haunt me, so to speak. The encounters between the ghost and the sentries and between the ghost and Hamlet are among the most memorable moments in the play. I remember most of all the tale the ghost tells Hamlet which begins this way:

I am thy father's spirit,
Doomed for a certain term to walk the night,
And for the day confined to fast in fires,
Till the foul crimes done in my days of nature
Are burnt and purged away.... (Act 1: Sc. V)

In subsequent years, reading Alex la Guma's novella, A Walk in the Night, set in apartheid South Africa, I encountered the ghost of Hamlet's father in a memorable way. One of the characters in this novella, Uncle Doughty, is an old, poor Irishman, who lives in a poverty-stricken place, "dying of alcoholism, diabetes and old age". We see him with Michael Adonis, a troubled black man, having an agitated conversation while drinking liquor. The topic of their conversation is life's troubles, and Michael Adonis thinks that, being a white man, Uncle Doughty cannot have troubles.

"Worry? Worry? the old man whined. We all got something to worry about." He mustered himself for a moment and shook a dried twig of a finger at Michael Adonis. "We all got our cross to bear. What's my white got to do with it? Here I am, in shit street, and does my white help? I used to be an actor. God bless my soul, I toured England and Australia with Dame Clara Bright. A great lady. A great actress she was." He began to weep, the tears spilling over the sagging rims of his eyes and he reached for the bottle again. "We're like Hamlet's father's ghost. I played the ghost of Hamlet's father once, London, it was."
"You look like a blerry ghost, you spook," Michael Adonis said bitterly. He jerked the bottle from the old man's hand and tipped it to his mouth and took a long swallow, gagging and then belching as he took the neck from his lips. His head spun and he wanted to retch. (25)

Every time I teach A Walk in the Night, I point out the presence of the theme of the ghost of Hamlet's father as a clear example of the inter-textual dimension of this novel. I also invoke Richard Wright's Native Son, pointing out the striking similarity between the difficult living conditions of the people in the two novels and the suspenseful police pursuit of Bigger Thomas in Native Son and Michael Adonis in A Walk in the Night.

Contemplating the ghost theme in Hamlet and A Walk in the Night reveals interesting connections. I note, for example, how murder features in the two situations. The ghost of Hamlet's father tells Hamlet the story of his father's murder and urges him to take revenge. Uncle Doughty, the "ghost" in  A Walk in the Night, is eventually killed, accidentally, by Michael Adonis. The shock that Michael experiences as a result can be compared to the shock that Hamlet feels at the news of his father's murder. I wish I could write more, but this is a simple blog post, not a scholarly essay.
Posted by Mbele at 1:04 PM No comments: 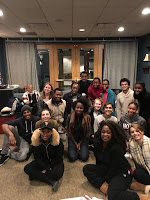 This evening, following an invitation by Karibu, a St. Olaf College student organization, I made a presentation on African storytelling. I am passionate about sharing the heritage of the African people of which I am deeply proud. I have done this in the past, at St. Olaf College and other places.

This evening, as usual, I began by highlighting the central significance of Africa as the cradle of the human race. This has important implications, including the fact that Africa is where language and storytelling originated. I went on to briefly explain the functions of storytelling, such as mediating the human endeavour to interpret and understand the world and the human condition. 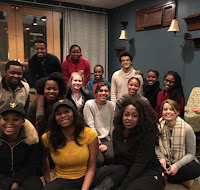 In order to illustrate the African way of philosophizing about life, I discussed three proverbs: i) Before you cross the river, don't insult the crocodile's mouth. 2) Even though you may be taller than your father, you still are not his equal. 3) It is because of man that the blacksmith makes weapons. The last two proverbs, from the Ashanti, are published in Harold Courlander's A Treasury of African Folklore. 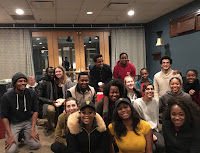 After this, I told two folktales: "The Chief's Daughter," from the Gurensi people of Burkina Faso, which is published in Steven H. Gale's West African Folktales, and "The Coming of the Yams," an Ashanti tale published in Harold Courlander's A Treasury of African Folklore. Both tales are complex and profound meditations on the dilemmas of life.

In my evolution as a folklorist, I have come to believe that when I am invited to perform folktales, I should never read them to the audience. If I do not know the tale, I read it in advance, and then perform it in front of the audience. That way, I feel I am staying true to the reality of oral performance. The Ashanti tale I told today is one I did not know before. I read it a short while before performing it.
Posted by Mbele at 9:30 PM No comments:

I have received an invitation from Professor Barbara Zust of Gustavus Adolphus College to speak with students she is preparing to take to Tanzania on a study abroad program. She has informed me that the group will meet on January 2 and 3 at the Mount Olivet Retreat Center for their pre-trip orientation. I responded right away that I will join them on January 2.

Professor Zust has led this program again and again and has always invited me to talk with her students about cultural issues. Before our meetings, she has the students read my book, Africans and Americans: Embracing Cultural Differences.

I always look forward to these opportunities to talk with Americans about what they should expect when they go to Africa or when they interact with Africans in the U.S.A. This is the work I do under the auspices of Africonexion.com

I have always been touched and humbled by what the students say when they are in Tanzania and after their return to the U.S. A. They admire and appreciate the hospitality of the Tanzanians, and they note how their experiences in Tanzania accord with what I say in my book and in our orientation meetings about cultural differences. As I reflect on all this, I tell myself: what a great way to foster mutual understanding in our world, which is increasingly becoming a global village.
Posted by Mbele at 9:54 PM No comments: