At the World Festival 2016, Rochester 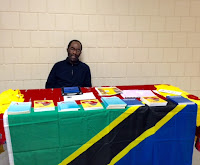 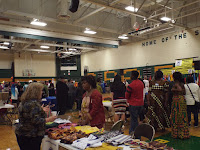 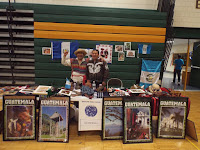 Today, I attended the World Festival at the Mayo High School in Rochester, Minnesota, which I mentioned on this blog. I set up my table, displaying my publications and the Tanzanian national flag. People, some saying they were attracted by my display, came to talk with me about my work and share their stories. I remember, for example, an American lady who said that she has a friend who taught at the Moshi International School in Tanzania. Another lady said that she had been a Peace Corps volunteer in Western Kenya during the mid eighties.


For the duration of the festival, people kept coming and going. At my table and around the exhibition hall and in the corridors, I met and spoke with people from many countries, including China, Philippines, Kenya, Uganda, Cameroon, U.S.A., Mexico, Trinidad, and Guatemala.


The two men in the picture on the left are from Guatemala. After I gave them my little newspaper article, "Chickens in the Bus," the man wearing a hat regaled me with tales of how in Guatemala one can see people traveling in the bus with their chicken or piglet. 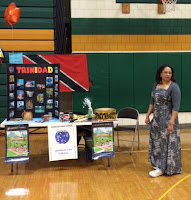 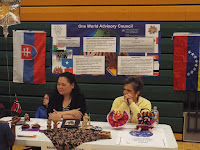 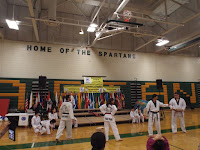 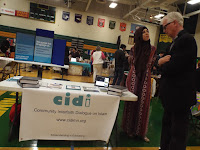 The lady in the picture on the left represented Trinidad. I told her I have read and taught some Trinidadian literary works. I mentioned Sam Selvon as one of my favourite writers.

She asked if I had read The Lonely Londoners. I told her that that is one of the works I liked the most and that I had taught it a number of times. We went on to talk about other writers, including V.S. Naipaul, Shiva Naipaul, and Earl Lovelace.

The festival involved many aspects. There were artistic performances, drumming, displays of national flags, art, handcrafted items, musical instruments, jewelry, and publications. There was even a karate demonstration.


The diversity of cultures and organizations represented at the festival was impressive. The pictures on this page, taken at random, afford some indication of this fact. The festival presented unique and unforgettable learning opportunities. 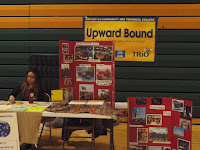 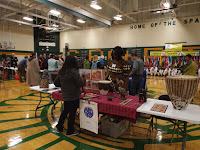 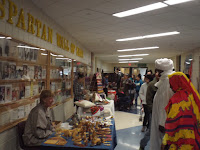 It is not possible to recount everything that transpired at the festival. Considering that there were hundreds of attendees, it is clear that there were countless experiences and conversations. This was a truly significant community event with global significance, for which the Rochester International Association deserves much praise and gratitude. 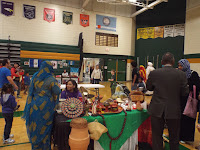 I am looking forward to attending the World Festival 2016 which will take this place on April 29 and 30. This is an annual event, and I attended it for the first time last year, as I reported on this blog.

Rochester,  a city in southeastern Minnesota, is famous as the home of the Mayo Clinic It is also a true microcosm of the world, in terms of its cultural and ethnic diversity. It makes perfect sense that this city hosts an annual World Festival.

Like last year, I will be displaying my books, talking with people of different ages and cultures about my work as an educator and cultural consultant. It is likely that I will meet Americans who have traveled to Africa or lived there, or who have family members or friends there, and we will have ample opportunities to share stories about our experiences in cultures different from our own.

More on Nawal el Saadawi's "The Fall of the Imam"

In my Muslim Women Writers course, we have now read our third text: Nawal el Saadawi's The Fall of the Imam.  I always hesitate to say we have finished reading any work of literature.

I had taught The Fall of the Imam years ago, in my Post-colonial Literature course. Reading it now, I see clearly how it weaves together recurring accounts of what appears to be a dream or a nightmare in a social system ruled by the Imam, supposedly in accordance with shariah.

The rule of the Imam is one of terror, whose claims of piety are hypocritical. In certain respects, The Fall of the Iman evokes Kafka's writing and the existentialist notion of the absurd. The Imam's regime appears formidable, but it is haunted by intense feelings of insecurity, perpetually lashing out at real or imagined enemies.

The main character is a woman who is hounded by the male accomplices of the Imam seeking to punish her for alleged offences. These men's zeal in what they believe is defence of Islam expresses itself in the cruel oppression of women. They believe that independent or disobedient women have to be punished, and the recurring image I have mentioned dwells on such punishments.

The Fall of the Imam  does not lend itself to easy, straightforward analysis. Drawing from and incorporating familiar traditions such as Islamic and Christian doctrines as well as Arabic folklore, it is an intriguing feat of the imagination and a caustic critique of religion and society.