A Memorable Meeting in Minnesota

Today was a special day. I had a memorable meeting with Dr. Barbara Poole Galyen, a friend of many years, who is based in California, but has been visiting relatives in Minnesota, a short drive from Northfield, where I live.
Barbara and I met for the first time in 1995, when she came to Tanzania as a volunteer on my research project on epic folklore of Northern Tanzania, sponsored by Earthwatch. We worked on Ukerewe Island in Lake Victoria.
Barbara told me that time, and has kept telling me, that that experience sparked her interest in Africa and launched her on her subsequent professional life. She went to Kenya to work for the United States International University, and later started a consulting company dealing with cultural issues in the global context. She has traveled the world and made many connections.
We were delighted to meet today, having met for the last time in 1997 in Kenya. We shared stories about our time in Ukerewe, current politics, and a new course I will be teaching in the spring--"Muslim Women Writers." I signed for her a copy of my book, Africans and Americans: Embracing Cultural Differences, which relates to our mutual interests as cultural consultants.
Here is what Barbara herself wrote today on her facebook page about our meeting:

I enjoyed a wonderful visit with Dr. Joseph Mbele who was the one who originally introduced me to Africa in 1995 on an "Earthwatch" adventure. I give him credit for changing my life completely after I moved to Kenya as a result of our fascinating studies on a remote island in Lake Victoria, TZ. Born in Tanzania, Dr. Mbele is currently a professor at St. Olaf College in MN where he continues to work on special projects around the world! He's inspiring me again to get more involved in heart-felt projects globally.
Posted by Mbele at 9:49 PM No comments: 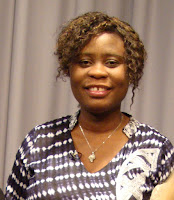 I have heard, with much delight, that President Barack Obama has appointed Bukola Oriola to the United States Advisory Council on Human Trafficking. Bukola is a Nigerian-born woman living in Minnesota. I have known her from 2009 when I first met her. Before then, I knew only her name from an African community newspaper published in Minnesota.

One day, I read a statement she made that she had written a book manuscript but didn't know how to get it published. Having self published two books, I felt the urge to help her. I called her, even though we did not know each other, and I told her I had read her statement and wanted to help her publish her book. 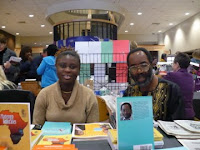 Bukola came to St. Olaf College, and I showed her how to publish online. Soon thereafter, she published  Imprisoned: The Travails of a Trafficked Victim. We kept in touch, and I invited her to the Twin Cities Book Festival which was held on October 10, 2009, so she could see the kind of work writers do after publishing a book. The photo on the left shows the two of us at my table.

The book facilitated Bukola's work of conveying to the public her message about human trafficking. In addition to giving talks to various audiences, she started a television program as well as a non profit organization, The Enitan Story.

Bukola is a passionate advocate for the victims of human trafficking, while fostering people's awareness of this global problem. I am impressed and inspired by her work. I recall how I first contacted her, how we met, and what she wrote in the acknowledgement section of her book:

I would also like to thank those who worked with me to get this book published. My profound gratitude goes to Prof. Joseph Mbele of St. Olaf College, Northfield, Minnesota, who showed me how to get my book published, otherwise it would have been another Word Document on my computer. It would have not been able to give the message of hope to the hopeless. God bless you sir.

President Obama's selection of Bukola is a great honour to her. I have witnessed the excitement it has generated in Minnesota, around the USA, and, in a special way, in Nigeria. Bukola sees in all this the workings of destiny. She believes that the suffering she underwent as a victim of human trafficking was part of God's plan to prepare her for her mission. You can hear her in this interview: 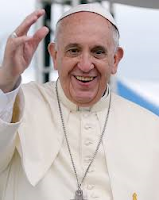 In his encyclical, "Laudato Si," Pope Francis includes a prayer for our earth. I was deeply moved by the encyclical, and I wanted to translate the prayer into Swahili, for fellow Tanzanians and Swahili speakers elsewhere, since it captures succinctly the spirit of the encyclical itself.

With my experience of translating Matengo folktales and Swahili poems into English, as well as English poems into Swahili, I know the challenges, frustrations, and delights of translation. I know what a humbling experience it is to translate such a thoughful, nuanced, and soulful message as Pope Francis's prayer. Still, I wanted to convey some sense of it to Swahili speakers.


A prayer for our earth

All-powerful God, you are present in the whole universe
and in the smallest of your creatures.
You embrace with your tenderness all that exists.
Pour out upon us the power of your love,
that we may protect life and beauty.
Fill us with peace, that we may live
as brothers and sisters, harming no one.
O God of the poor,
help us to rescue the abandoned and forgotten of this earth,
so precious in your eyes.
Bring healing to our lives,
that we may protect the world and not prey on it,
that we may sow beauty, not pollution and destruction.
Touch the hearts
of those who look only for gain
at the expense of the poor and the earth.p
Teach us to discover the worth of each thing,
to be filled with awe and contemplation,
to recognize that we are profoundly united
with every creature
as we journey towards your infinite light.
We thank you for being with us each day.
Encourage us, we pray, in our struggle
for justice, love and peace.

As my South Asian Literature course enters its final phase, we have begun reading Michael Ondaatje's The English Patient. I had never read this work before, but have taught Ondaatje's Anil's Ghost and read his collection of poems, The Cinnamon Peeler. I have always been aware, however, of the great reputation of The English Patient, winner of the Booker Prize, and I feel I should have read it long ago. However, as the saying goes, better late than never.

Having begun reading The English Patient, I find myself recalling several literary works, including Defoe's Robinson Crusoe, Hemingway's "The Snows of Kilimanjaro," and Mia Couto's The Tuner of Silences. Abandonment as an existential reality seems to unite all these works.

The main character in The English Patient fell from the sky after his plane was shot down over the Sahara desert during the Second World War and was rescued by Bedouins. Soon, we see this badly wounded person, the English patient, being taken care of by a nurse in Italy. His memories constitute a major part of the novel as it evolves. I am not able at this point to say much, but I am eagerly following the story, with the figure of the wartime nurse reminding me of Florence Nightingale.

Although I have only started reading The English Patient, I have begun to notice the pain that permeates it, much as it does in Anil's Ghost and "Letters and Other Worlds,"one of the poems in The Cinnamon Peeler. It is tempting to surmise that Ondaatje's vision of the human condition is rather somber. That is my initial impression, to be corrected or vindicated through further reading of Ondaatje's work.
Posted by Mbele at 4:46 PM No comments:

My Book Donation to "Papa's Shadow"

During the recent Ramble Pictures fundraising campaign for the documentary film, Papa's Shadow, I contributed a little money and copies of my book, Africans and Americans: Embracing Cultural Differences. to be given to donors who gave 200 dollars and above.

Today, Jimmy Gildea, founder of Ramble Pictures and maker of Papa's Shadow, who was one of the students in my Hemingway in East Africa course, visited me at St. Olaf College as we had agreed, to get the books. I signed five copies, and we had some time to talk about Ernest Hemingway, our visit to Montana, the fundraising campaign, and so forth.

Jimmy also took the opportunity to film some footage of me reading Green Hills of Africa and taking a short walk in St. Olaf College's quadrangle. Jimmy wondered if I had any photos from my childhood or younger days. I could tell he was keen to add these elements to Papa's Shadow, although it is a wonderful documentary as it is. I know because I have seen it.

Papa's Shadow will be released soon, Jimmy believes, probably in February. It is not a work of fiction but a documentary on the life, travels, writing, and philosophy of Ernest Hemingway, especially as pertaining to his East African safaris in 1933-34 and 1953-54. Much of it is a conversation on these topics between me and Patrick Hemingway, the only remaining child of Ernest Hemingway. I can hardly wait for the release of this documentary to the world.
Posted by Mbele at 9:12 PM No comments: 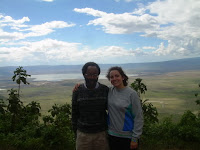 Here I am sitting all alone on top of Ngorongoro Crater in the rain. Mr. Percival is worried about the trucks getting up the grades and perhaps everyone has gone to see about them. The crater is very beautiful, about twelve miles across and blue, gray and green, all flat from this height, but you can see grass and trees and thousands of wildebeest. Ernest could see zebra but I couldn't. It is a game reserve, and in the hands of the Maasai. We are spending Christmas Eve here, and it will be very cold at night--maybe before with this rain and wind. We climbed all morning, a native driving at great speed up the one-car road. About two-thirds up the jungle started, the first we had seen, and very beautiful and tangled with roots and overhanging branches--pretty awful to get lost in. (p. 207)
Posted by Mbele at 1:44 PM No comments: