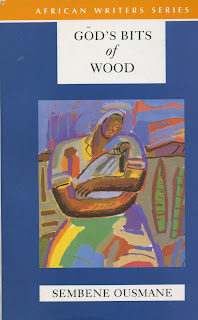 After discussing Ferdinand Oyono's The Old Man and the Medal, my African Literature and Politics class picked up Sembene Ousmane's God's Bits of Wood, enabling us to continue our exploration of African Francophone writing.

After years of studying epics, I now see God's Bits of Wood in terms of the epic genre. The struggle of the workers, epitomized by the strike, is a classic epic tale, reinforced by Maimouna's songs from the ancient legend of Goumba N'Diaye, "the woman who had measured her strength against that of men."

This legend foreshadows the role women play in God's Bits of Wood. Mindful, however, of the many female characters and their roles, we dwelt on specific characters: Old Niakoro, Maimouna, Ramatoulaye, Ndeye Touti, and the little girl Adjibidji, who reminds me of another little girl, Raka, in Anita Desai's Fire on the Mountain. Both are free spirits, perpetually crossing the boundaries their societies impose on girls and women.

God's Bits of Wood methodically explores the trials and tribulations of a society under siege, reminiscent, in some ways, of Albert Camus's The Plague. Both texts explore what happens or might happen to human beings under such extreme conditions, as suffering persists and intensifies, seemingly with no end in sight.

We talked about themes in the novel: oppression, discrimination, racism, religion, colonial education, the politics of language, the relationship between the old generation and the new, and between men and women. In discussing these themes, we invoked the ideas of people like Frantz Fanon and Ngugi wa Thiong'o. I gave the class plenty of time to read the novel, and I believe the experience was worthwhile.
Posted by Mbele at 7:55 AM No comments:

A Visit to the School of Environmental Studies 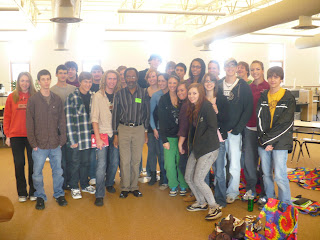 Today I visited the School of Environmental Studies (SES) in Apple Valley, to talk about folklore and the environment. Although I have visited this school many times, each visit is a new and refreshing experience.

As in the past, Todd Carson, the class teacher, invited me. I told the students today that I love and respect their school so much that I would never decline an invitation to speak there.

I discussed the evolution of language and folklore as vehicles for human survival and development. I talked about how humans have used and continue to use myths, legends, folktales, and other folklore forms to make sense of the world around them. Through incantations, rituals and ceremonies, humans have sought to influence the world.

Discussing stories of the origin of the world, I mentioned the Popol Vuh of the ancient Mayans, having just taught it in my folklore class at St. Olaf College. I also mentioned the widespread African story of how God separated himself from humans. 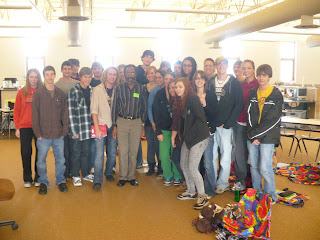 I talked about how story telling appropriates advances in technology, such as writing. Nowadays story telling goes on in newspapers, television, and social media such as blogs and Facebook and Twitter. In response to a question, I said that all disciplines are, essentially, forms of storytelling.


Since I visit the SES when the students are reading selections from Matengo Folktales, I always get to share some tales. Today, I told one tale from that book, "The Monster in the Rice Field."

My visits to the SES are always memorable. The students are different every year, but always delightful, brimming with intellectual curiosity. They ask great questions, and the two-hour session ends rather quickly. (Photos by Todd Carson).
Posted by Mbele at 11:43 AM No comments: 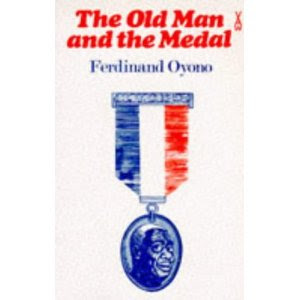 We noted the ironies of this novel, around themes such as the friendship between Meka and the colonizers, and how Meka ends up being arrested and jailed by the same system that awards him the medal. We noted, as well, the sad ending of the novel, as Meka, in the wake of all his recent troubles and disappointments, finally declares, "I'm just an old man now..."
Posted by Mbele at 4:02 PM 8 comments: 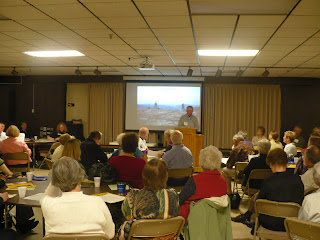 Today I attended the 12th annual Iringa Fall Festival at Roseville Lutheran Church. This was an occasion for members of the St. Paul Area Synod of the ELCA and Iringa Diocese, Tanzania, to review and celebrate their partnernship. 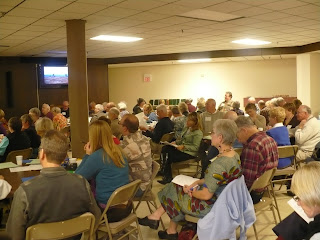 This partnership involves not only matters of faith and fellowship but also programs in such fields as education, agriculture, and health. Various other synods and congregations across the USA are involved in such programs, with partners across Africa and other parts of the world. 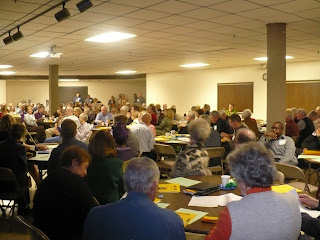 Early in the program today, we heard a recorded message from Bishop Owdenburg Mdegela of Iringa. He recounted the many benefits of the partnership and thanked everyone involved and looked forward to an even brighter future. We also watched a video documentary of the life and work of the late Rev. Dr. Benjamin Ngede, a powerful testimony to a truly remarkable life.

The event drew many participants. 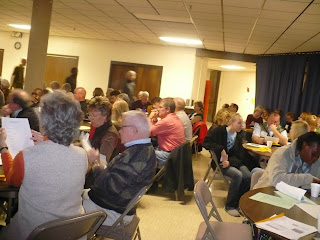 There were several guests from Iringa, whom I was delighted to meet. They came from Tungamalenga and Kihesa. I met many people who know me, from hearing me speak in their churches or other venues, or from reading my Africans and Americans book. Some had heard, from Professor Per Anderson of Concordia College, that I was taking LCCT students to Iringa next year. 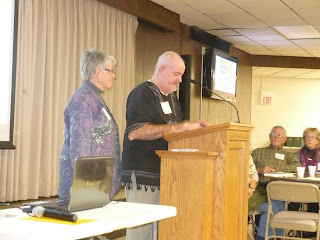 One of the speakers, Rev. Don Fultz, standing with his wife Eunice in the photo on the left, surprised me by introducing me to the audience, declaring that I wrote a wonderful book. He brandished a copy, urging everyone to read it. At the end of the Festival, I was accosted by people looking for the book. Fortunately, I had some copies. 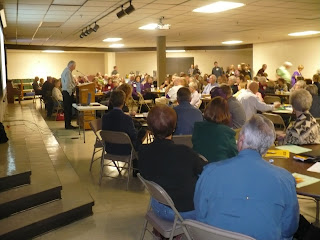 There were about a dozen speakers, on such topics as Tumaini University, Radio Furaha, Saccos, the volunteer experience, the Agricultural Institute, the Endowment Fund, and Ilula Hospital. There was even a photo contest, and booths with information about these programs as well as Tanzanian items for sale. I saw people wearing Tanzania's kitenge outfits.
Posted by Mbele at 9:52 PM No comments: