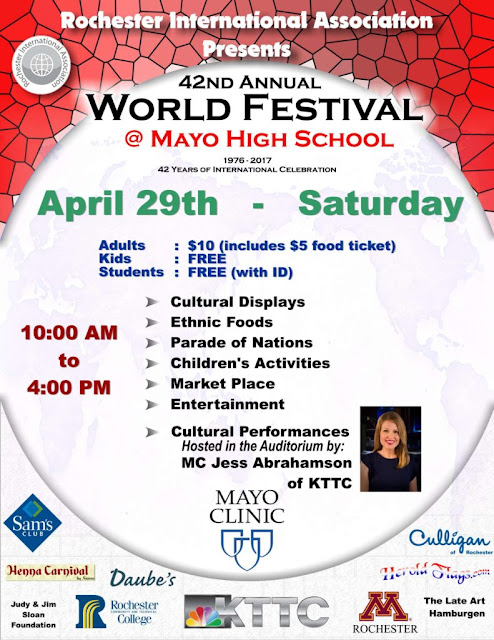 I am awaiting the 2017 World Festival to be held on April 29 in Rochester, Minnesota. This is an annual event, organized by the Rochester International Association (RIA). I have attended this event before, including last year, as I reported on this blog.

As a result of such engagements, my connections to Rochester have continued to grow, particularly after I joined the board of the RIA a few months ago. It was through the RIA board that I recently gave a UMR Connects lecture on "Folklore as Expression of Ethics."

As in the past, a number of countries from various parts of the world will be represented in this year's World Festival. The World Festival is a great opportunity for people to meet, learn about various countries, and enjoy cultural displays and performances. As usual, I will be participating as an educator, author, and cultural consultant.
Posted by Mbele at 5:00 PM No comments:

My UMR Presentation on Ethics in Folklore

I have just returned from Rochester, Minnesota, where I gave a lecture on "Folklore as Expression of Ethics: European and African Examples." The lecture, which I mentioned on this blog,  was part of the University of Minnesota Rochester (UMR) Connects program.

I learned about the UMR Connects during a meeting of the board of Rochester International Association (RIA) of which I am a member. I offered to propose a topic to the UMR Connects for a presentation, in line with the request by the UMR Connect that the focus for April be ethics. As a folklorist, I chose to focus on "Folklore as Expression of Ethics: European and African Examples."

After my talk, audience members asked questions. One of these was whether there were contradictory messages in proverbs. I said that was, indeed, the case, and I offered examples from the Swahili tradition. I explained that proverbs embody a deep understanding of social and other phenomena and are therefore used by the elders, because these are sophisticated enough to know which proverb applies to which situation.