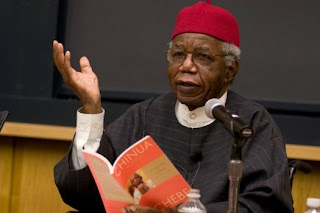 Around 8:20 this morning, my youngest daughter told me that her older sister had texted to say that Chinua Achebe had passed away. I was dumbfounded and could hardly say anything.

I have struggled the whole day, in vain, to find the appropriate way to pay tribute to this giant and icon of modern African literature.

Achebe helped shape the direction of African literature, not only through his own writing, but also through his role as editor of the African Writers Series which launched the careers of many African writers.

Achebe was a sage, in the best tradition of the wise village elders. Watching interviews, I note that he exuded humility and charm. Committed to the idea that the artist is a teacher, Achebe helped us Africans to understand our place in the world, our weaknesses and our potential.  A profound humanist, he touched hearts and minds around the world.

Although I never met Achebe, I have been lucky to have taught his works regularly, discovering, each time, more dimensions of his creative genius and timeless lessons.

Though no longer with us in person, Achebe will continue to touch people. For the rest of our lives, we will be paying tribute to this gifted storyteller, who gave Africa a voice in the world.
Posted by Mbele at 7:33 PM No comments:

Reflections on my Book Talk in Faribault 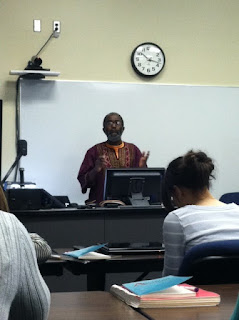 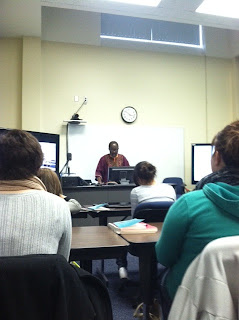 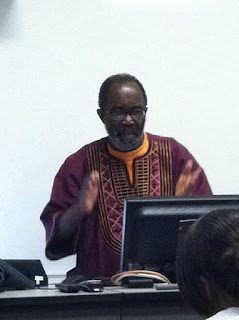 Our class, "Culture and History of South Africa,"  read Africans and Americans: Embracing Cultural Differences last week. The author, Joseph Mbele came to visit us on Tuesday. It was unanimously considered a DELIGHT.

The book is a fast read, and Joseph Mbele writes in a conversational, welcoming style that sucks you right in, keeps you laughing, and keeps you reading.

In person, Joseph proved to be one of the most brilliant, funny, warm, and gentle human beings I've ever met. My students loved him; the two hours with him flew past. 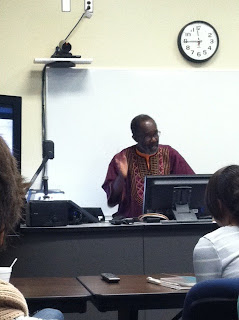 This was the most delightful read about the differences between Africans and Americans and how we relate to each other. My students loved it, found it fascinating, and flew through it.


If you have students, friends, neighbors, classmates, ANYBODY you know from Africa, this book is for you. If you are traveling to Africa, like my students and I are, it's a MUST.

Best part? Now whenever I am late (no, that never happens), I can say I'm on AFRICA TIME.

View all my reviews

Posted by Rebecca (Becky) Fjelland Davis at 6:53 AM No comments: