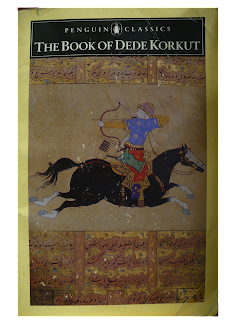 Teaching Dede Korkut, has broadened my understanding of the epic genre. The poetry is very moving, even in translation. I wonder how much more powerful it is in the original. Aspects of the narrative technique of this epic reminded me of the drama of Bertolt Brecht. I have also learned about the global reach of Dede Korkut, extending, for example, as far as Brazil.
Posted by Mbele at 4:16 PM No comments:

LCCT Visit to the University of Dar es Salaam 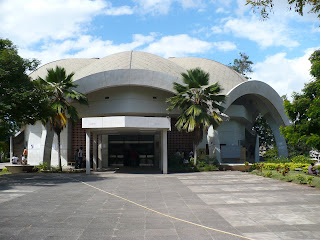 On July 26 and 27, 2010, I was part of a four member delegation from the Lutheran Colleges Consortium for Tanzania that visited the University of Dar es Salaam (UDSM). We discussed with UDSM officials the current state and the future of the cooperation between LCCT and UDSM, a program that has lasted over twenty years. Under this program, many American students have studied at UDSM, and dozens of Tanzanians have visited LCCT institutions, advancing their graduate studies or enhancing their administrative skills and experience. Some of these Tanzanians are now prominent figures in government, education, and other sectors. 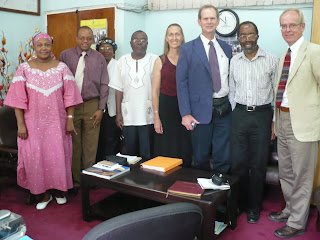 During our two days at UDSM, we met various officials. We had detailed discussions about key aspects of the LCCT program, such Swahili courses, the academic calender, student orientation, dormitory life, travel opportunities, safety, interaction between American and Tanzanian students, and the visiting scholar program. 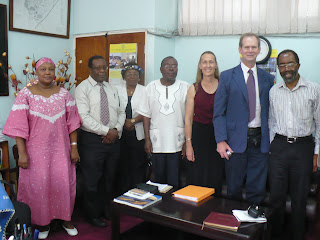 We affirmed the value of the program and expressed the desire and determination to continue it, even in the face of challenges posed by the current world economic environment.

For me, this was another opportunity to reconnect with former colleagues, since I taught at the UDSM before going to St. Olaf College. Indeed, as we moved around the UDSM campus, we met a number of people who had been to the USA on the LCCT program. 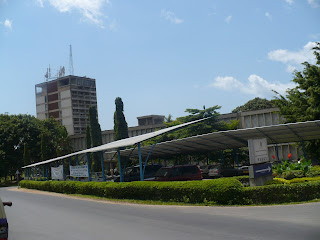 People who have visited or studied at the UDSM will recognize the buildings on the left. The Arts and Social Sciences Tower is on the far left, and the Administration building is in the forefront, next to the parking lot. This is a main stop for "dala dala" minibuses going to Mwenge and Ubungo. 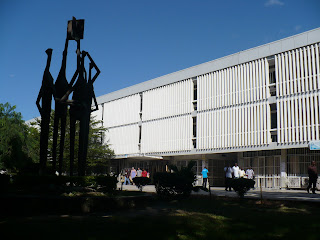 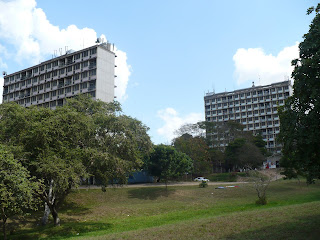 Here are two of the student halls of residence. On the left is Hall Two and on the right is Hall Five. As an undergraduate at UDSM, 1973-76, I stayed in Hall Five, on the seventh floor. I don't remember the room number, though. Visiting UDSM brings back fond memories of those days. 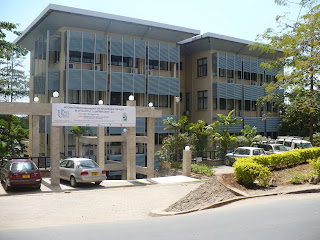 On the left is the University of Dar es Salaam Business School (UDBS). During my undergraduate days, it used to be the Department of Commerce and Management, housed in the Arts and Social Sciences Tower, not in its present location, which was a vast parking lot for University vehicles.
Posted by Mbele at 3:56 PM No comments:

Looking Back on "A Grain of Wheat"

My African Literature and Politics course concluded with a study of Ngugi wa Thiong'o's A Grain of Wheat as I had noted in a previous blog post. After ranging across the African literary landscape, discussing A Grain of Wheat was, for me, a veritable return home to East Africa, to the lives of peasants similar to what I experienced in my childhood and the sounds of Swahili.

At the same time, A Grain of Wheat brought up themes we had encountered in previous texts. In A Wreath for Udomo we read about Africans in Europe, where they interacted with Europeans in the years before African independence. In A Grain of Wheat, we read the story of Mr. Thompson, an Englishman who got to know Africans in England, an encounter that inspired him to take up a career in the colonial service, ending up in Kenya.

Both A Wreath for Udomo and A Grain of Wheat recount the sadness and frustration of colonial officials about to depart the colonies on the eve of Independence. A source of joy for the Africans, Independence is a painful experience for these functionaries of the colonial system.

One of the key themes in God's Bits of Wood is, of course, the heroic role women play in the strike. As I noted in a previous blog post, this harks back to the ancient epic traditions. A Grain of Wheat presents women of great courage as they participate in the Mau Mau uprising. In both texts, these women challenge the men to show their mettle, even putting them to shame.

In both God's Bits of Wood and A Grain of Wheat, the people struggling against oppression find themselves contending with others they consider traitors. In both novels, there are dramatic, suspenseful trials, which end in unexpected, anti-climactic ways. In God's Bits of Wood, an old man diffuses the fury of those who would put the traitors to humiliating punishment, while in A Grain of Wheat, Mugo, the person the community believed to be one of their greatest heroes, steps forward and confesses, to everyone's disbelief and shock, that he is the person who betrayed Kihika, the hero the colonizers hanged.

This outcome is as surprising to the people in the novel as it is to us readers. Ngugi succeeds in weaving a suspenseful tale with a truly unexpected ending. In the process, he deftly describes the intricacies of interpersonal relationships as they get tested by the hardships and agonizing dilemmas brought about by the state of Emergency and long periods in detention camps. While he infuses a realism in his description of events which is sometimes graphic, Ngugi's warm affection for the people and the land is unmistakable. He evokes very well the spirit of the people on the eve of independence, their hopes as well as anxieties.

Reading my students' answers to my final examination questions, I felt that they had gained a credible understanding and deep appreciation of the challenges Kenyans faced in the struggle for independence. In conjunction with the other texts, the students seem to have gained a good understanding of the social and political realities Africa faced in the twentieth century, especially in the fifties and sixties.
Posted by Mbele at 7:36 PM No comments: