Planning for Afrifest 2010 got into high gear today, at the First Cup Cafe in South Minneapolis. The Afrifest board met and went briskly through the agenda, emerging with concrete plans for the annual cultural festival, scheduled for August 7 this year. 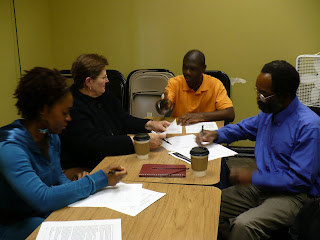 Nathan White, chair, informed us that the venue for Afrifest 2010, MEC Event Center in Brooklyn Center, Minnesota, is confirmed. The Center for Families has agreed to be the fiscal agent for Afrifest. We approved the Bylaws and Articles of Incorporation of the Afrifest Foundation. 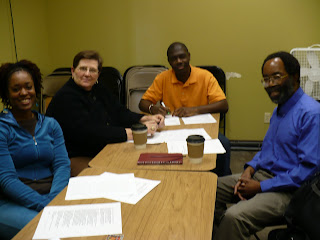 Our main task now contacting artists, exhibitors, vendors, and sponsors. We are publicizing the event and inviting everyone. We have a big venue, with plenty of exhibition space. Booths are free for non-profits, $25 for artists, and $50 for vendors. For more details, visit the Afrifest website website and Facebook page.
Posted by Mbele at 3:54 PM No comments:

A Meeting at the Buckham Library, Faribault

Some memories don't fade away, perhaps never will. One such, for me, is a meeting I had on February 17 with the staff of Buckham Library in Faribault, Minnesota.

Delane James, the Library Director, had invited me to talk about cultural differences relating to Africans and Americans. Faribault, like many cities and other communities in the USA, is experiencing an influx of immigrants and refugees from different parts of the world. For Faribault, these include Somalis, Sudanese, and Mexicans.

Having read my Africans and Americans book, Delane wanted me to address the issue of the differences between African and American culture. She felt it would help her staff in their dealings with African clients. I gladly accepted the invitation. As an educator who views teaching as a sacred profession, I have a soft spot for librarians, seeing them as fellow educators.

I had visited Faribault many times before, to attend meetings of the Faribault Diversity Coalition, as a member of its Board. I had also gone there to give talks on cultural issues, to the Faribault Rotary Club, the Faribault High School, the First English Lutheran Church, and the Correctional Facility, as I reported here. I had even given a talk at the Buckham Library, titled "When Africa Meets Faribault".

Talking to the Library staff, I noted their eagerness to understand their African clients, the better to serve them. They asked questions about Islamic practices, for example, given that the Faribault Somalis are Muslims. It was a pleasure to answer their questions. There was one, or example, on the separation of women and men in Islamic societies. I noted that this is true not only in Islamic culture but also African culture, as a manifestation and expression of respect. The concept of avoidance as respect exists in many parts of the world.

Members of the audience who had read my book urged the others to read it. Everyone agreed we should hold another meeting, a book talk and signing, open to the public. This kind of diversity training, whose motivation stems from the people themselves, is most satisfying. Call it diversity training with a human face or, better still, a human heart.
Posted by Mbele at 8:06 PM 3 comments:

The Monster in the Rice Field

On the fifth floor of the St. Olaf College Library, there is a statue titled "The Purple Dragon." It was made by Joanna Newell. 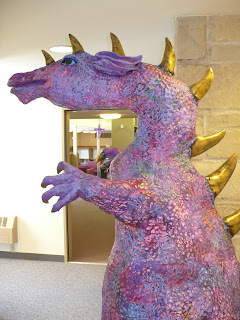 I do not remember the first time I saw this statue, but in recent days I have been paying special attention to it. It reminds me of "The Monster in the Rice Field," one of the tales in my Matengo Folktales. This is a tale about a monster that takes away members of a family as they take turns watching over the rice in their field. No one knows what the monster in the tale looked like, and the Matengo tradition offers not a clue. I guess that is why I like the dragon in the St. Olaf Library. 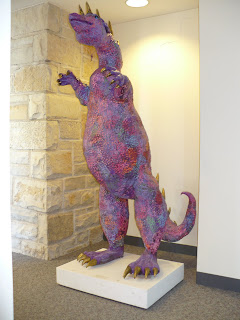 About seven foot high, this seems to me the kind of monster the Matengo tale describes. Of course, in creating this monster, the artist was not thinking about the Matengo tale. 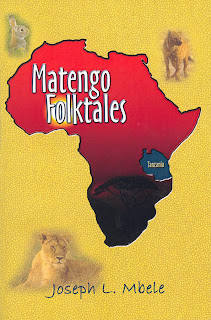 Perhaps she was thinking about a monster in a different tale, but the monster she created works for the Matengo tale quite well. It is amazing what the human imagination can do to bridge cultures. There are monster tales in all human societies, and they seem to have been there from the dawn of story telling. We never tire of the stories, scary as they might be.

Folktales inspire the imagination of audiences everywhere. After reading the tales in Matengo Folktales, students at Colorado College decided to perform them. As their professor told me, "One group did the Monster in the Rice Field complete with puppets they had made to represent the children and parents and which made it all too vivid how people just kept disappearing." 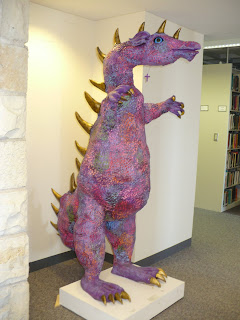 Art is a universal language, and the monster is part of that language. To paraphrase Carl Jung, the monster, just like the bogeyman, is a product and manifestation of our psychic experiences. We encounter monsters, typically, in our dreams. No wonder stories of monsters have such a hold on us.
Posted by Mbele at 6:22 PM No comments:

On February 20, I went to Minneapolis to attend a meeting of the board of Afrifest, an annual Pan African festival held in the Twin Cities, Minnesota, to showcase the history and contributions of people of African descent in the world. 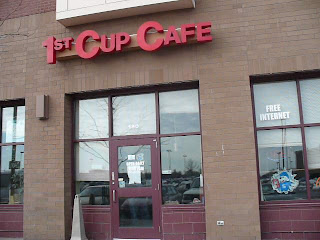 We met at the 1st Cup Cafe in South Minneapolis, a popular venue among Africans and others for meetings, presentations, book events, and entertainment. 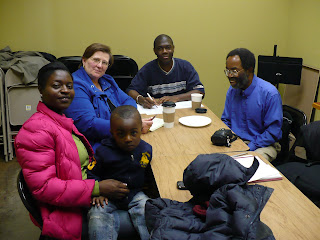 This was the first planning meeting for Afrifest 2010. Nathan White, seen in the photo above, second from the right, chaired the meeting. He is the founder of Afrifest. Several members of the board were not able to attend this meeting. I have been a member of the Afrifest board from the beginning, my main contribution to the festival being to present the history of the African people from their origins in Africa to where they are today, across the world, noting, especially, their contributions in the cultural field. I have done this using a display of posters, alongside my writings. As an educator, I enjoy talking with children, parents, young people and adults about these matters. 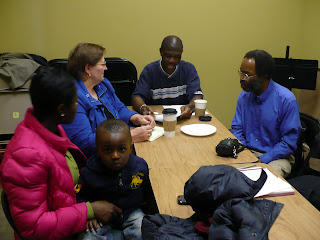 In this meeting we dwelt mostly on reviewing the proposed constitution of the Afrifest Foundation. We have decided to reconstitute Afrifest, making it a foundation. 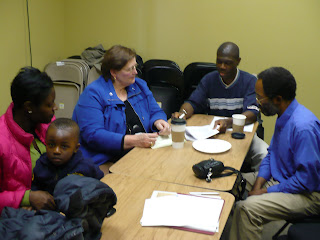 As board members we are all volunteers, but the rewards of working on the mission and programs of Afrifest are great, in terms of learning and teaching others about our heritage and present reality as people of African descent. We feel we are following, albeit in a small way, the footsteps of the likes of Marcus Garvey, Kwame Nkrumah, W.B. Dubois, Gamal Abdel Nasser, Jomo Kenyatta, Julius Nyerere, Malcolm X, Bob Marley and Walter Rodney. That affords immense satisfaction and the will to keep working, even in the face of challenges. 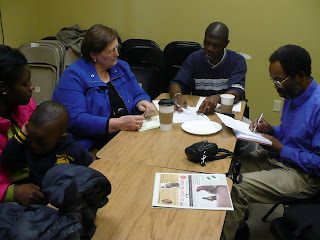 We selected August 7 as the date for Afrifest 2010. As in the past, we will have a number of planning meetings leading up to that day. We look forward to another great event, with educational displays, fashion and talent shows, vendors, music and great networking opportunities.
Posted by Mbele at 3:52 PM No comments:

An English Class at Augustana College

I was a guest of Augustana College, Illinois, from January 30 to February 2. The highlight of my visit was a talk I gave to over 40 students and faculty preparing to go to Ghana and Senegal on a study program. However, as often happens during such visits, I did other activities as well, one of which was to visit Professor John Tawiah-Boateng's English class. 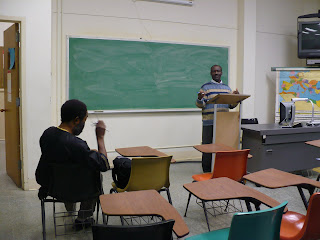 Professor Tawiah-Boateng had told me that at the time of my visit, the class would be reading Chinua Achebe's short story, "Marriage is a Private Affair," and I was to lead the discussion on that story. 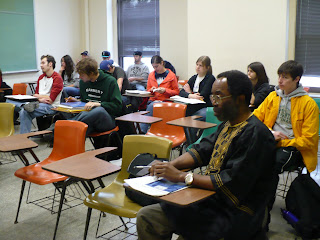 Introducing me to the students, he mentioned my various academic activites, travels, and publications. He noted that I had written a study guide on Chinua Achebe's "Things Fall Apart." 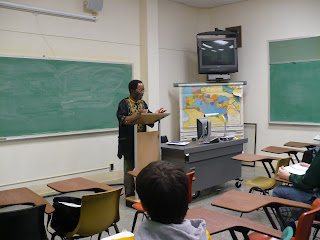 Before this invitation to Augustana College, I had not read Achebe's "Marriage is a Private Affair." Reading the story, as I was preparing for this visit, I found it to be vintage Achebe. 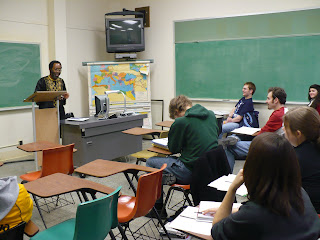 Not only does Achebe dwell on conflict between indigenous African and European culture, but he also explores the contradictions within the so called indigenous culture. His description of an elder torn between the two conflicting worlds is memorable, if ironic, at the same time. 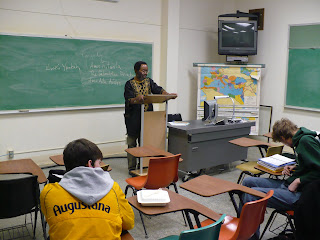 In discussing the story, I led the students through an exploration of its themes, such as the dialectic between rural and urban reality, gender and the relations between men and women, language and communication. 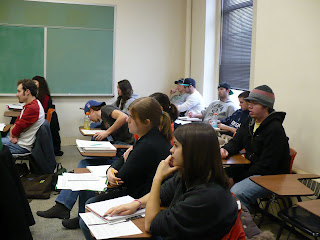 I dwelt on the central place of marriage in African culture as depicted in folklore and literature. I highlighted the specific issue of choosing a spouse and the cautionary narratives depicting young people who defied tradition and parental wishes: Amos Tutuola's "The Complete Gentleman" and Ama Ata Aidoo's "The Dilemma of a Ghost" and "Anowa." 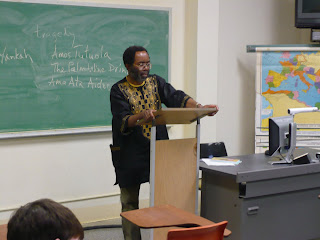 On the subject of parental wishes and injunctions, I mentioned Shakespeare's "The Merchant of Venice" and the theme of the three caskets. 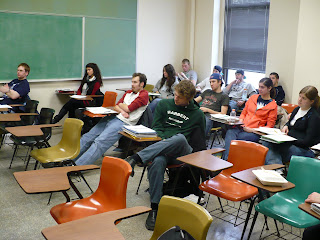 With imput from the students and Professor Tawian-Boateng, I think we had a good class. I can sit back, relax, and remember that class, reflecting on what a priviledge it is to be a teacher, blessed with the opportunity to touch minds across the world.
Posted by Mbele at 5:30 PM No comments: