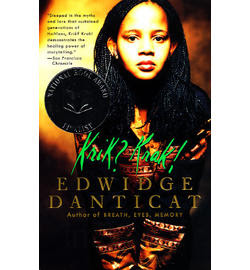 For several days, my Post-colonial literature class has been studying Edwidge Danticat's Krik? Krak! This is the second time I am teaching this book.

This time, we have been raising and struggling with difficult questions: why are these stories so somber, generally speaking? Is there something in Dandicat's life and world view that shapes these stories? The recurring tale of Massacre River is harrowing, so is the pervasive portrait of a people struggling with poverty, oppression and lack of opportunity. However, such is the stuff of social realist writing, reminiscent of certain works of Charles Dickens, Fyodor Dostoyevsky, Upton Sinclair, John Steinbeck, and Alex la Guma.

Discussing Krik? Krak! has afforded us an opportunity to dwell on the history of Haiti and its present circumstances, how slaves of African descent fought for their freedom, in the last decade of the eighteenth century and became the first Black republic in the Western Hemisphere, then went through an unpleasant two centuries to end up where they are today, not even a shadow of their former glory.

Krik? Krak! does a good job of portraying the present reality of Haiti while keeping in mind the glorious history and celebrating great heroes like Boukman, the predecessor of Toussaint L'Ouverture. Krik? Krak! is not all about Haiti, however, but about Haitians in other places as well. There are even references to their African roots. Ultimately, Krik? Krak! is about the human condition.

Dandicat is a versatile writer. Her stories display delightful narrative skills and a lucid style. The first story, "Children of the Sea," with its quasi-epistolary technique sets the tone for the rest of the collection. Krik? Krak! is a most readable and teachable collection.

It is always wonderful to be able to tell students that you have seen a particular writer. It turns out that I did attend an appearance by Danticat in St. Paul, Minnesota, during which she answered questions about her life, philosophy and writing.
Posted by Mbele at 12:16 PM

I am about to teach "New York Day Woman" for the first time. Do you have any discussion questions or activities or background information that might help me with this endeavor?

Oh, what a pity, Emily, I did not see this message earlier. I might have been able to make a suggest or two. Sorry about this oversight.