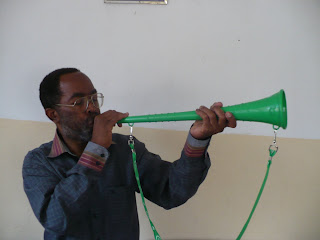 As the 2010 World Cup drew near, South Africa got more and more in the limelight. I was in the USA, watching, as a debate emerged about the vuvuzela, a plastic horn blown by South African fans during soccer matches. Some people called for the banning of the vuvuzela from the World Cup, arguing that they could not stand the noise of the vuvuzela. I was amused, knowing that the Africans would not succumb to such demands. I recalled what I had written in my Africans and Americans book about how Africans differ from Americans in their attitude to loud music. Africans want their music loud.As it turned out, the vuvuzela not only reigned during the World Cup but it also spread to various parts of the world. I was in Tanzania during the World Cup, and I was not surprised to see that the vuvuzela had arrived in my country.People who had traveled to South Africa had brought the vuvuzela to Tanzania, and it was spreading rapidly. It features at soccer matches. I saw the vuvuzela on giant billboards around the country. 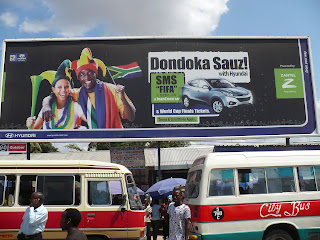 At Kimara in Dar es Salaam, I saw a small place called Vuvuzela Hair Salon. As an icon, the vuvuzela was quickly becoming a feature of popular culture, speech and jokes.During the World Cup, I read that people from Europe and elsewhere who traveled to South Africa for the World Cup took the vuvuzela home as a souvenir. Not everyone likes the vuvuzela, though. A few days ago, I read a report about efforts to ban the vuvuzela from a sporting event in New Zealand.

On July 11, I was in a bar called Sawai Grand, in the Sinza area of Dar es Salaam. It was packed with soccer fans. We were watching the final of the World Cup between Holland and Spain. That day, I saw the vuvuzela for the first time. The bar owner, a friend of mine, had brought it from South Africa. He handed that vuvuzela to me. I held it and blew it, again and again. 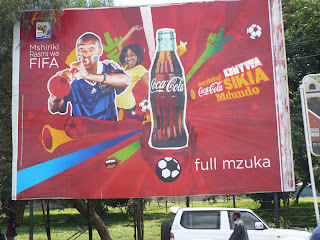 If you think the vuvuzela makes too much noise in a soccer stadium, wait until you hear one in a packed pub. Blowing that vuvuzela I felt its magic and knew that the vuvuzela was here to stay and conquer the world.
Posted by Mbele at 4:23 AM

south africa will not only be remembered for sucessful hosting of the world cup but also for the invention of the magic vuvuzela. as they spread everwhere i managed to buy two vuvuzelas. i intend to keep one of the two for quite a long time to come so that it keeps reminding me of WOZA 2010.

I stayed Tanzania, up to August 21, and with every passing day, I saw how rapidly the vuvuzela was spreading. It shows up on all kinds of occasions, not just soccer matches. Now that the election campaigns have started, I believe they will be flooded with vuvuzelas.