Teaching "A Grain of Wheat" 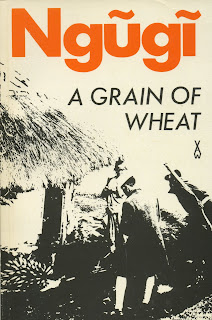 My African Literature and Politics class is now embarking on a study of Ngugi wa Thingo's A Grain of Wheat. I read this novel for the first time around 1971-72 at Mkwawa High School, Tanzania. It was on the reading list for the Literature course.

I remember quite well the experience of studying A Grain of Wheat. Our teacher was Paul Sorenson, a Danish volunteer. Soft-spoken and focused, he led us through a methodical exploration of this novel, alongside works of criticism, such as an essay by David Cook, titled "A New Earth."

There are memories that seem to last for ever. One such, for me, and close to my heart, is the cover of the novel--both the front and the back--featured on this page. 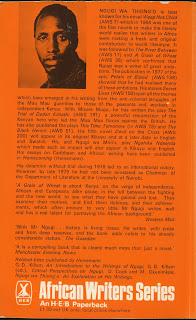 In those days, the author's name was James Ngugi. A Grain of Wheat and Ngugi's other writings touched us in a special way. Because of our rural backgrounds, most of us could relate to the lives of Ngugi's characters.

I have just introduced Ngugi to the class, with remarks about Kenya's colonization, settlers and the alienation of land, the Kenyan people's resistance against colonialism. I dwelt on the Mau Mau uprising and the Emergency.

I mentioned Ngugi's earlier works, such as Weep Not Child, The River Between, and The Black Hermit; his advocacy of writing in African languages, his stand against imperialism and for decolonization. I look forward to rich and memorable conversations with my students about A Grain of Wheat.
Posted by Mbele at 5:40 PM

Email ThisBlogThis!Share to TwitterShare to FacebookShare to Pinterest
Labels: A Grain of Wheat, James Ngugi, Kenyan Literature, Ngugi wa Thiong'o, The River Between, Weep Not Child