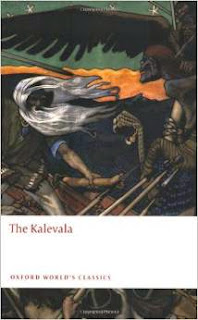 For the first time, I am going to teach The Kalevala, the national epic of Finland, in my Folklore course this Spring. The other texts are The Epic of Gilgamesh, Gassire's Lute, African Folktales, and The Vanishing Hitchhiker. I also always include recordings of folktales and the video documentary "Angano Angano," which presents Malagasy storytelling in its socio-cultural context.

Here I want to say a few words about The Kalevala, which I have known about for decades and regularly mention in my publications and conference presentations. Even though I have never read it, I know much about it and, for a long time, thought about teaching it. Now, having made the decision to do so, I am excited.

I look forward to sharing with my students the fascinating history of the making of The Kalevala as we know it, thanks to the research of Elias Lönnrot in the early part of the nineteenth century, not to mention the work of translators, especially Keith Bosley, whose translation we are going to use. I look forward to talking about the political and ideological significance of The Kalevala as an expression and vehicle of Finnish nationalism.

Equally exciting is the prospect of placing The Kalevala within the context of the epic as a genre with a history stretching as far back as the Sumerian empire--if not earlier--with all the debates and controversies regarding issues such as definition, structure, performance, and concepts of heroism. Such are the issues that make the epic one of the most challenging and also most interesting genres of Folklore.
Posted by Mbele at 7:18 PM