A Conversation With Patrick Hemingway 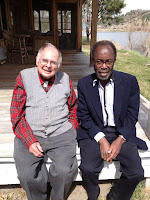 I called Patrick Hemingway today, and we had another conversation. I wanted to touch base and share with him my latest Hemingway adventures and dreams. I told him about my Oak Park visit, my acquisition of the new edition of Green Hills of Africa, my plan to visit the John F. Kennedy Library and maybe the Finca Vigia and other places in Cuba, such as the Floridita Bar.

We talked, as always, about Tanzania. Patrick wanted to know the state of writing in Tanzania, and wondered whether writing in Swahili had a chance in a world dominated by languages such as English. We also talked about the educational system, including the University of Dar es Salaam.

We talked about my plan to go to Iringa, to visit his old home in the Sao Hill area. I mentioned Ernest Hemingway's hunting expedition in the Bohora Flats. Patrick immediately asked if he had told me about a Baluchi settlement in that area. He said the Baluchis grew onions there. He gave a broader account of them as having been brought to East Africa as soldiers and mentioned their role as guards of caravans into the interior. He also mentioned a recent film about animals in the Ruaha National Park.

We talked about the caravan routes, and he said that European explorers used them. I mentioned Henry Stanley, who went inland and met Dr. Livingstone at Ujiji. Patrick noted the important role Dr. Livingstone played in getting Europeans to know that quinine was their salvation in otherwise deadly malaria country. Patrick noted that the evidence of the slave routes remains, in the form of mango trees, especially.

Patrick was happy that I was planning to visit the Hemingway collection at the JFK Library. As he had told me in the past, he told me to let him know when I was going. He would let the library staff know, so they would assist me. I thanked him and mentioned that he had told me this in the past.

Regarding the Finca Vigia, Patrick told me that if I get there, I will be surprised to see how its surroundings resemble Africa, for it was all "nyika." "Nyika" is the wooded grassland vegetation that is so common in Tanzania and elsewhere in sub-Saharan Africa.

I told Patrick that I had bought the new edition of Green Hills of Africa that he had told me was in the pipeline. I shared with him my excitement that this edition contained Pauline's diary, as he had told me. I reminded him that I had dreamed of going to Stanford University to read it. He said it is probably easier to read it in its printed form.

Patrick remains concerned about the population explosion in Africa, and he wonders about the availability of adequate food. He reiterated that the thing that mattered to him the most in Africa was the people. He repeated his criticism of people who return from Africa talking only about the wildlife, and flaunting their photos of lions.

I told Patrick about my plan to return to Tanzania upon my retirement, and that I looked forward to being the host for Americans who go to Tanzania. He commented that I would be a good bridge between the two peoples. When I said that I feel confident about that role, since I know something about Americans, Patrick quickly responded, "You know us very well. I like your book."
He meant my Africans and Americans: Embracing Cultural Differences.

Once again, I was touched to hear Patrick say this. He has told me again and again how much he likes my book, and I feel both honoured and humbled.