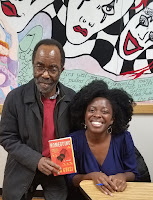 On June 4, here at St. Olaf College, I started teaching a summer course on African Literature, which I have taught several times before. Following my introduction to the course, we started reading Homegoing by Yaa Gyasi, a young Ghanaian writer raised in the USA. I met her on March 2 at the Hemingway Festival in Moscow, Idaho, where she was the guest of honour as winner of the prestigious PEN/Hemingway Award for 2017. She gave a magnificent reading and signed copies of her book.

Homegoing takes us several centuries back to the country known today as Ghana and portrays the life of the people then. Apart from themes such as marriage, the family, and the customs associated with them, as well as racial and ethnic relations and consciousness, the novel delves into the issue of slavery and the slave trade. The characters--African and European--who ran the slave trade describe it as a business.

The novel depicts life in the Cape Coast Castle, with Europeans and their families living quite comfortably while beneath them, in the dungeons, the enslaved Africans endure abominable conditions. Seamlessly, the novel transports us to the United States, where we witness the lives of the African slaves and the slave owners on the plantations. From the Castle to the plantations, we witness a continuation of the monstrous tale of human suffering wrought by human beings.

My students and I are still reading the novel, but I think it would be a great idea to read it alongside Ama Ata Aidoo's The Dilemma of a Ghost, first performed in 1964 and published in 1965. A comparative study of the two works would be rewarding. Apart from their common preoccupation with the African and African American experience, and the theme of slavery, both draw inspiration from African folklore in significant ways.
Posted by Mbele at 11:04 PM

It’s arduous to search out educated folks on this subject, but you sound like you recognize what you’re talking about! Thanks online casino bonus