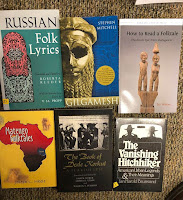 I wish I could teach folklore without books. We would just be sitting around telling stories, singing and talking about folklore. We would be watching video recordings of folklore performances from different parts of the world and discussing them.

Trapped in the culture of writing, I have selected six books for my folklore class this fall: The Vanishing Hitchhiker, Russian Folk Lyrics, How to Read a Folktale: The Ibonia Epic from Madagascar, The Bootk of Dede Korku, Gilgamesh, Matengo Folktales. I want to say a word about Matengo Folktales.

For years, I had misgivings about including my own book in my course. I began to change my mind after learning that professors in several colleges and universities had used or were using it. One even invited me to speak in her class.

I was also aware that I could do my best teaching of the folktale if I used my own Matengo tradition. That would benefit my students the most, since I know the language, the performance tradition, and the cultural references of the tales. I also can sing the songs.

Still, I had misgivings, which I only overcame when I decided that the students would buy the book and use it and then sell it back to me after the course, if they wished. I am pleased with that policy.
Posted by Mbele at 5:46 PM