On June 9, 2010 I was in Amsterdam for several hours, on my way from Minneapolis to Dar es Salaam. As we were standing in the long, packed queue, proceeding to the boarding gate, a lady approached me confidently and asked me to sign a copy of my Africans and Americans book.

I did not know the lady, but she had the book in her hand. As she was handing me the pen and the book, I humbly asked for her name, and she told me to write Charlotte and Aimee. I asked where she was from and she said Nebraska, adding that she and several other people were on their way to Arusha, Tanzania, on a mission trip. Such mission trips are now very common among U.S. Lutherans and other Christians.

As Charlotte and I talked, we discovered that we have a mutual friend, Pastor Martin Russell, who is a seasoned leader of mission trips to Tanzania. I have never met him, but we are connected on Facebook. As we were getting connected on Facebook, Pastor Russell told me that he constantly recommends my book to mission trip participants. That is how Charlotte got to know about it.

During the flight, a young lady came to my seat and declared that she was Charlotte’s daughter and excitedly started praising my book, saying it “really nailed it.” Other people sitting nearby heard her. I was humbled. She asked if I would pose for a photo with her group later, and I gladly agreed.

When the plane landed at the Kilimanjaro International Airport in Arusha, I joined the group in the back of the plane and Charlotte took the photo shown here. 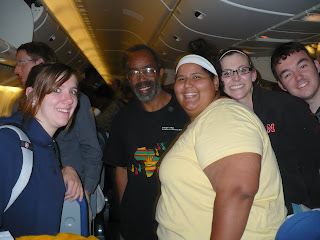 Such encounters with my readers have become quite common during flights between the USA and Tanzania. I am easy to recognize because of the photo on the back of my book, and I know that wherever I go, I cannot hide.
Posted by Mbele at 5:55 AM