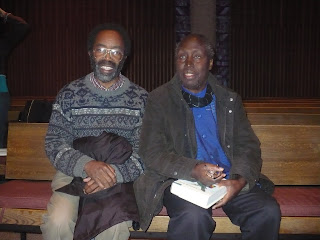 Today, I submitted to the English Department the description of a seminar I will be teaching in the Fall, 2011, titled "Ngugi: African Literature and Politics." Here is the description, now available to prospective students:

Ngugi wa Thiong’o is one of Africa’s leading writers. He is also a political and cultural activist. He has written short stories, novels and plays, as well as essays on literature, politics and language. He is the most well known champion of African language literatures. His work draws on sources as diverse as Gikuyu folklore, The Bible, Chinua Achebe, Karl Marx and Frantz Fanon. In this seminar, we will read and discuss a selection of Ngugi’s works in a chronological order, including his earliest short stories, The Black Hermit, The River Between, The Trial of Dedan Kimathi, A Grain of Wheat, and Wizard of the Crow. We will explore the evolution of Ngugi’s writings, and how he has been influenced by, and in turn influenced, African writing and debates about politics, culture and language. Studying Ngugi offers a unique opportunity to understand the relationship between literature and politics in contemporary Africa.

(The photo above, featuring Ngugi and me, was taken during Ngugi's visit to Macalester College, where he gave a reading of Wizard of the Crow)
Posted by Mbele at 9:53 PM

Prof.Mbele
I wish I was in that class.I would specifically love to read and discuss,Grain of Wheat and The River Between.Those two books shaped how I viewed African Culture and Politics(especially from East Africa)

I am sure your students will have fun reading and discussing these those titles.

Thanks for your message. It is a privilege to introduce African literature, culture and politics to these students. I am lucky to be teaching in an institution that fosters a global perspective, preparing students to be global citizens.

Ngugi is a prolific writer and it is now quite hard to decide which of his works to teach in a course such as I have described. I read "A Grain of Wheat" for the first time at Mkwawa High School, and was captivated by its thematic, artistic and other qualities. I feel I have to include it in any course on Ngugi.

In secondary school, we read "The River Between." Yes, it was really moving, and it was the kind of novel that perfectly suited us at that age. I wish today's young people in our country had the same interest in such matters.