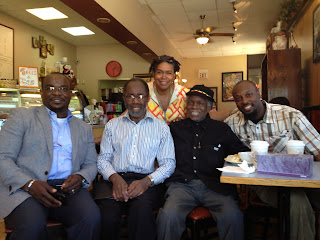 A number of people showed up today at the Golden Thyme Coffee shop in St. Paul, Minnesota, to be interviewed for a documentary on people of African descent in Minnesota.

The documentary will be shown at the Cultural Relations Summit for Minnesotans of African Descent, which is scheduled for June 28, 29, and 30. The Summit is being organized by the Minnesota Humanities Center and the Council on Black Minnesotans.

Some of the people who came for the interviews at the Golden Thyme appear in the photo. From left to right are Adebayo, Joseph Mbele, Tene Wells, Professor Mahmoud el-Kati, and Adrian Mack. Tene Wells worked hard to coordinate this project.
Posted by Mbele at 8:59 PM