A Chance Encounter With A Reader 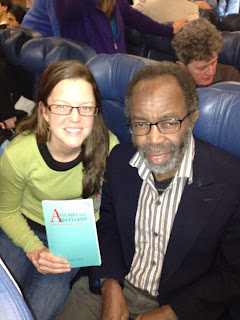 As a writer, I have had my share of unexpected encounters with readers. One of these, which I will always remember, happened on January 3, 2013, as I was traveling from the USA to Tanzania.

I had boarded a plane in Minneapolis, bound for Amsterdam. Having taken my seat, some ladies sitting near me asked me if I would be willing to trade seats with a friend of theirs, so that she could come and sit near them. I readily accepted their request and vacated my seat.

As soon as I was comfortably seated, I greeted the young lady sitting next to me. Responding, she looked at me and excitedly remarked, "You wrote a book." Saying that, she quickly reached for her purse which was under the seat in front of her and brought out a copy of Africans and Americans: Embracing Cultural Differences. 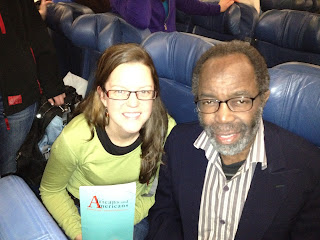 The young woman told me that she was traveling to Kenya as part of a group of volunteers with Medical Missions Worldwide. Through her, I got to meet other members of the group. She also said that a friend of hers from the University of Wisconsin-River Falls told her to read that book.

That made me recall that a few years earlier a group of students from that university had visited me at St. Olaf College for some cultural orientation prior to traveling to Uganda to work on a building project. We had a fruitful conversation and a book signing.

Needless to say, this encounter was quite a surprise to me. However, that was not the first time I had encountered such situations with readers, who easily recognize me because my picture appears on the back cover of my book. I had a similar experience with readers from Nebraska at the airport in Amsterdam, as I reported on this blog.

(Photos were taken by John A. Williams II, Executive Director of Medical Missions World Wide)
Posted by Mbele at 3:21 PM

Excellent informative piece. A typical traveler's anecdote. We need to see more elderly, experienced Tanzanian authors and academics writing these sort of things online. Most of them are out of the digital world, hoping someone will imagine what they know. Well done Professor Mbele and keep it up that way.As for the lady who had the book, thanks for sharing your love for literature.. this is true blogging.

Thank you, Freddy, for your comments. First, allow me to let the world know that it was you and Jeff Msangi of Bongo Celebrity fame who urged me to get into the world of blogging. I thank you both, and always will.

You have rightly placed my blog post within the genre of travelers' tales. I like the way you did that. Again, thanks.