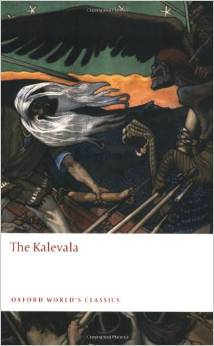 I have started reading The Kalevala, the Finnish epic, in preparation for teaching it in my Folklore course. It is proving to be a most enjoyable learning experience. How I wish I had read this epic years ago, when I first heard about it. I would have cited it again and again in my Folklore and Literature classes, since it offers much food for thought and for comparative studies.

I always start my Folklore course with discussions of the origin and evolution of language, which goes hand in hand with the origin and evolution of storytelling and folklore as such. I enjoy sharing with my students what the experts have been saying about the evolution and diversification of the functions of language and storytelling  from the earliest  beginnings. I enjoy sharing the theories about the interface between orality and literacy as discussed so eloquently and insightfully by people like Walter Ong.

In view of all this, I have been moved by how The Kalevala presents the issue of the power and magic of language. The Kalevala exemplifies the art of storytelling in a masterful fashion. It weaves together  adventure, suspense, and unexpected outcomes.

When asked by a young lady he desires to accomplish a series of seemingly impossible feats, Old Vainamoinen does so, but, in the end, gracefully admits that he is unable to make the Sampo. He tells the young lady that he will get in touch with Ilmarinen, the peerless master smith, who will surely make the Sampo.

That is what happens. Old Vainamoinen travels from the young lady's home in the remote northern lands back to his home and contacts Ilmarinen with the news of the young lady and what she wants before she will consent to marry any man.

Ilmarinen travels all the way to the young lady's home and, after much effort, succeeds in making the Sampo. Here is what follows:

Then the smith Ilmarinen
went to beg the girl.
He uttered a word, spoke thus:
'Will you marry me, maid, now
that the Sampo is finished
and the bright-lid fair?'

But that fair girl of the North
put this into words:
'And who here next year
who the third summer
would set the cuckoo calling
set the birds singing
if I went elsewhere and came,
a berry, to other lands!
If this hen were to be lost
if this goose were to wander
mother's offspring were to stray
the cowberry went away
all the cuckoos would be lost
the joy-birds would move away
from the peaks of this
knoll, the shoulders of this ridge.
Nor am I free otherwise
cannot leave my maiden days
these jobs to be done
in the summer rush--
berries on the land un-picked
the bay shores unsung
untrodden by me the glades
the groves unplayed in by me.'

Ilmanarinen, crestfallen and sorrowful as he is, gracefully takes his leave and prepares to go back home, out of this "dark" and "dreary" place, as the poet/narrator describes it.

Reading this, I recalled the words inscribed in the casket the Prince of Morocco chooses in Shakespeare's The Merchant of Venice, in his unsuccessful bid to win Portia's hand in marriage:

All that glitters is not gold--
Often have you heard that told;
Many a man his life hath sold
But my outside to behold;
Gilded tombs do worms infold:
Had you been as wise as bold,
Young in limbs, in judgement old,
Your answer had not been inscrolled.
Fare you well, your suit is cold.

I have read only about one fifth of the epic, but this has whetted my thirst for more. I look forward to going through the rest of the epic, full of admiration for the enormous effort and skill Elias Lonnrot put into creating this epic, and truly impressed by Keith Bosley's translation of it.
Posted by Mbele at 6:22 PM