Memories of the 2017 World Festival, Rochester 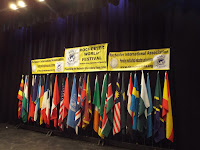 On April 29, as planned, the World Festival took place in Rochester, Minnesota. This was the culmination of weeks of planning by the Rochester International Association (RIA). I had featured the festival announcement on this blog. 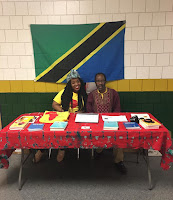 My daughter Zawadi and I attended it, representing Tanzania and Africonexion: Cultural Consultants. We arrived at the festival venue at 9:45am, with enough time to set up our table and hang the Tanzanian flag on the wall. On the table we displayed my publications, including books such as Africans and Americans: Embracing Cultural Differences and Matengo Folktales.

Around 10:00am, festival visitors started arriving. We talked with those who came to our table about my work as a writer and cultural consultant. Several people recognized me from last year's festival, and I was humbled that they did.

After about thirty minutes, the flag ceremony started. This is part of the festival. It involves a procession of people from various countries carrying their national flags which they RIA owns. The RIA board had for the first time, acquired the Tanzanian flag, which I proudly carried in the procession.

For the rest of the day, we continued talking with people who visited our table and we handed out free xerox copies of my little article, "Chickens in the Bus," as well as information about Africonexion: Cultural Consultants.  We also took turns to walk around the exhibition areas, looking at various  displays and taking photos. 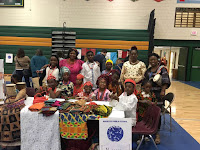 I passed by the table seen in the photo on the left. It was the Nigerian table and they cheerfully posed for this photo. Among the most memorable experiences were conversations my daughter and I had with a professor of Winona State University. As soon as she saw us, she remarked that she had bought my book last year. She said that she would like to bring her students to the festival in the future with an assignment: to interview people from four different countries in order to learn about global cultural diversity. I thought that was a brilliant idea. 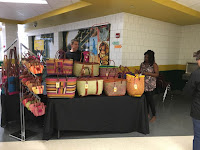 Another memorable experince for us was talking with a lady who, after looking at my book, Africans and Americans: Embracing Cultural Differences. began telling of about her experiences in Japan. As an American, she said, she had made cultural blunders in communicating with the Japanese. We enjoyed the conversation, since her experiences resembled mine in the USA. It was rewarding to encounter someone who shared her personal stories so freely and with an arresting sense of humour. 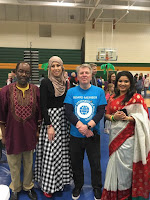 Moving around, I visited a table where I saw a woman wearing hijab. When I approached the table, I realized I had seen this woman last year. On her table I saw Islamic books such as Muhammad Asad's The Message of the Qur'an, John L. Esposito's Who Speaks for Islam, and Wisdom for Life & The Afterlife: A Selection of Prophet Mohammad's Sayings, all of which I have in my collection.

I introduced myself, saying that I teach at St. Olaf College and one of my courses is "Muslim Women Writers," which I created to help counter prevailing ignorance about and misrepresentations of Islam and Muslims, especially Muslim women. 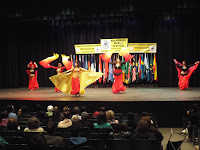 She, on her part, told me that she hosts the Faith Talk Show, and we agreed that it would be a good idea for me to appear on the show at some point in the future. Returning from the festival, I checked online and saw much information about this lady and her show, such this article. I am thinking it might be a good idea to invite her to speak in my Muslim Women Writer's class. 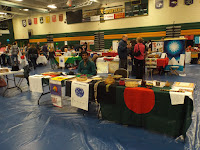 Throughout the festival there were performances by dance and musical groups from various countries. It was humbling to watch these performers as they generously shared their talents and traditions with all of us. 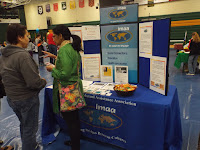 In addition to cultural items for sale, ranging from clothes and artifacts, to jewelry, and works of art, there were also foods from several countries.

The more I attend these festivals, the more I appreciate their value. As I watch the people attending the festival, volunteers, and vendors, and observe their countless conversations, I know that these festivals are a great way of connecting people. I am mindful of the fact that the people who attend the festival communicate with others around the world through email, social media, and so on, spreading the story of the festival around the world. I am doing that right now, with this blog post.

This was another very successful World Festival, a testament to enduring commitment of the RIA to bring people together.
Posted by Mbele at 6:46 PM